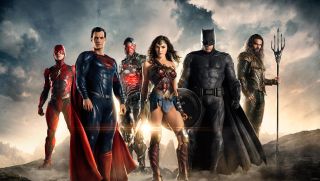 The Justice League movie trailers have so far focused largely on five heroes: Wonder Woman, Batman, Flash, Cyborg, and Aquaman. And while we haven't gotten a good look at him on film, we know Superman's going to make an appearance as well. But could a seventh hero appear, either as a surprise star or quick cameo? That's the rumor currently swirling around the internet thanks to a leaked soundtrack listing.

Over on the Imagine Dragons sub-reddit, user trastitius has shared a screenshot of what appears to be several songs from the film's soundtrack listed on the Justice League IMDB page. Regardless of how you feel about Skrillex being involved, the important thing to note is the the Imagine Dragons song is apparently called "Unite the Seven."

"Unite the Seven" was a tagline used to promote the DCEU before Batman v Superman: Dawn of Justice, and was plastered all over Jason Momoa's face when we saw his Aquaman costume for the first time.

However, Warner Bros. has since used the phrase "Unite the League," which has led fans to believe that there's a seventh Justice League team member yet to be revealed. (It could also mean there once was a seventh hero and plans changed the number to six, or that "unite the seven" referred to the seven seas, but those theories aren't nearly as fun to speculate about.) So if the leak is legit and if there is a secret hero being kept under wraps, who could it be? We have some ideas.

The most obvious choice. Green Lantern is often considered to be one of the most important members of the Justice League in the comics, and Henry Cavill previously wrote on Instagram that he was working hard at the gym to make sure he was "bigger than Green Lantern....Wait whaaat?" Whether Cavill was joking or not is up for debate, but at least the name is out there. Plus, Green Lantern could act as a way for our Earth-bound heroes to learn about bigger, galactic threats like DC ultimate bad guy, Darkseid. The only question is would this Lantern be Hal Jordan or John Stewart?

Like Green Lantern, the Martian Manhunter J'onn J'onzz has been around since pretty much the beginning of the Justice League in the comics. He played a prominent role in the Justice League cartoon, and is currently co-starring on Supergirl. So the name has some recognition behind it. Also like Green Lantern, Martian Manhunter could be a good excuse for DC to open its universe beyond Earth and start exploring the cosmic reaches of its cinematic universe.

After Aquaman, the next standalone DC hero flick scheduled is Shazam. If you're not familiar with the character, he's a bit wild. His schtick is that he is literally a child granted the powers of six gods; "Shazam" is both his name and an acronym standing for "the wisdom of Solomon, the strength of Hercules, the stamina of Atlas, the power of Zeus, the courage of Achilles, and the speed of Mercury." Nobody in the DCEU uses honest-to-goodness magic at this point, so Shazam could be Warner Bros' equivalent to Doctor Strange and introduce the concept of mysticism to the League.

Hey, if The Flash can have his own TV show and star in the DCEU, why not have his buddy Oliver Queen, AKA Green Arrow, do the same? In the TV series, Green Arrow is basically Batman - he runs around at night, his wealth is matched only by his capacity for brooding, and he's even had run-ins with one of the Dark Knight's most infamous enemies, Ra's Al Ghul. Adding him to Justice League could give him space to be more of the sarcastic and banter-heavy hero he is in the comics, and give Flash a more lighthearted buddy to chum around with.

What's better than one Justice League? Two Justice Leagues, of course. We already know WB is working on Justice League Dark, a film about heroes who handle the supernatural threats of the DC universe. Zatanna has been a member of both teams, and is actually quite the capable magic-user, despite her somewhat tacky wardrobe. And hey, if movie producers and executives and cynical enough to equate Wonder Woman's success with 'people like female heroes now,' she could make an appearance sooner rather than later.

Oh come on, you know you want this showboating gloryhound doofus from the future to get his turn in the spotlight. Booster started as something of a joke hero, but has been called upon by heroes and time travellers alike to act as savior of the universe. He has no superpowers and his costume prominently features gigantic, amber goggles. He's silly, is what I'm saying. Unfortunately, Booster is at his best when teamed up with Blue Beetle, and I don't think Justice League has room for that much silliness.