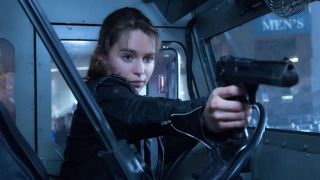 It says a lot about the trials and tribulations of the Han Solo movie that the involvement of the Mother of Dragons herself, Emilia Clarke, has sorta been swept to the wayside. But worry no more, the name of her character has finally been revealed.

Williams describes his own (now nixed) role as “a link between Han Solo and Emilia’s character, Kira”. The roundabout way for Kira and Han Solo meeting chimes in with an earlier leaked set shot showing Clarke, complete with flowing robes, leading Han, Chewie and Woody Harrelson through a fancy-looking interior. They certainly looked unfamiliar with each other at that point.

My best guess? She’s nobility of some sort. I hear she’s quite good at pulling off royal roles… That’s at odds with previous rumours of Clarke playing Han’s girlfriend, but you never know how things might turn out with that lovable rogue.

It’s probably worth pointing out that MakingStarWars.net believe that the spelling of Clarke’s character name is ‘Kura’ and not Kira. So, she’s named after an IKEA bed and not the name of the Death Note killer. Good to know.

Want some more hotshot Han Solo movie news? Aim your peepers at this brand-new Han Solo shot that’ll make you hot under the space collar, and a closer look at Chewie on the set.