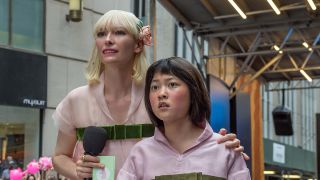 At this year’s Cannes Film Festival, a war was waged for cinema’s soul. In the red corner, Netflix: delighted to have two films (Okja and The Meyerowitz Stories) in competition. In the blue corner, French cinemas: irate that, because they were made for streaming, these films weren’t really films at all.

Uh-oh. The threat led organisers to hash together a new rule committing future Palme d’Or contenders to a big-screen berth. Meanwhile, across town, David Lynch insisted his triumphant return to Twin Peaks wasn’t a TV series, but an “18-hour film”.

What does ‘film’ mean in 2017? Online distribution and digital tech have radically changed how stories are produced, marketed, and viewed. TV shows have blockbuster budgets, while movies feel more like TV: the Marvel Cinematic Universe is as bingeable a boxset as Game of Thrones.

Historically, it was simple. A film was shot – and projected – on film, in cinemas. Today, as The Clash presciently (sort of) sang about same-day streaming, audiences can now stay (at home) or go (to the cinema).

Netflix is getting booed at the Cannes film festival. Here’s why that's wrong

Yet film culture still revolves around the latter, with weird asymmetry. Macon Blair’s acclaimed Netflix Original, I Don’t Feel at Home in This World Anymore, wasn’t guaranteed a review in UK newspapers. In contrast, Shia LaBeouf drama Man Down got the reviews... but reportedly made just £7 on opening weekend after screening in a single British cinema.

Is it worth the effort to get the coveted ‘film’ badge? Maybe we shouldn’t call them films anymore, but what’s the alternative? ‘Movie’ still comes with multiplex connotations. ‘Content’ covers everything, but hardly inspires passion. (Ditto, that other horrible piece of marketing-speak, ‘product’.) Technically, we’re living in the ‘post-film’ age, but who would recommend the latest ‘post-film’?

Or we accept that ‘film’ continues to change, and move on. Audiences don’t care about the name, after all; they just want to know is if it’s any good. Despite Christopher Nolan’s best intentions, a lot of people didn’t see Dunkirk in his preferred 70mm IMAX format.

It’s time that cinemas, critics and awards bodies all learned to lighten up and feel at home in this new world. Or is it just me?

Is it just me, or are all Marvel Cinematic Universe movies the same?