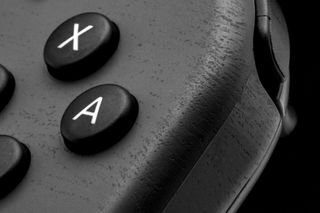 If you were thinking of skinning or applying any stickers or vinyl to your shiny new Nintendo Switch, don't. Word from decal maker dbrand is that both the console and controllers are incompatible with the adhesives used.

Dbrand has gone so far as to issue refunds for any skins they've sold and publicly warned gamers from trying to stick anything on their Switch. After testing on 10 store-bought consoles dbrand has concluded that it's "either cured or designed in a way which doesn’t play well with adhesive" adding that  "Joy-Cons and the console are not compatible with vinyl wraps or any adhesive-backed skin of any kind."

So what's going on? With the Joy-Cons dbrand reported minor indications of the outer coating beginning to peel off," which looks like the main image above.

While for the main console itself the screen/pad-printing process used for the logo is "also cured in a way which peels off with the adhesive on vinyl wraps."

It's an extraordinary move from the skin manufacturer which, by its own admission, "were going to make a ton of money" from Switch skins. But, based on its own testing, it's refunding all orders and no longer selling its planed line of products.