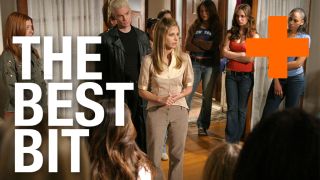 A lot of people don’t like the seventh and final season of Buffy the Vampire Slayer. Maybe you think I’m crazy picking any season 7 moment for my best bit when there’s such juicy pickings elsewhere, but when I think about the scenes that really stayed with me, the Slayer’s last speech in the finale episode of Buffy always comes to mind.

Maybe it’s the soaring music, the inspirational montage, or the fact that what happens afterwards completely changes the story of the Slayer forever, but I can’t watch it without simultaneously crying and feeling like I can take on the world. Seriously, if you’re ever feeling nervous or unsure about an important decision, watch Sarah Michelle Gellar ask you if you’re ready to be strong, and you’ll know what you have to do.

For those of you who haven’t seen it in a while, by the time we get to season 7’s Chosen Buffy hasn’t just been through hell, she’s lost everything. People seem to be dying left, right, and centre, the evil looks so bad you can’t see a way the good guys can win, and, perhaps most importantly, her friends have turned on her and cast her out. She’s broken and things are looking bleak as hell. By the time she’s getting ready to make her speech, you wonder what she can possibly say to these people who don’t trust her, don’t like her, and, in some cases, don’t even want to follow her, to make them brave.

Because that’s what she’s trying to do. She isn’t trying to win an argument or persuade them to do what she wants. She knows she has to take these young girls, and pretty much everyone she’s ever loved, into the bowels of hell to face an evil so overwhelming there’s a good chance it’ll be the end of the world, and she has to say something to them which will make them believe in that choice. What do you say in that situation? What would you say?

I won’t transcribe the whole speech (you can watch it in the clip above), but I think this is the most important part: “From now on, every girl in the world who might be a Slayer, will be a Slayer. Every girl who could have the power, will have the power… can stand up, will stand up. Slayers... every one of us. Make your choice. Are you ready to be strong?”

On the surface, she’s talking about the spell Willow performs which changes the destiny of the Slayer and enables all the Potentials to have the same superhuman strength only Buffy and Faith previously possessed. It gives them the power they need to ultimately win the war, but that’s just the supernatural tint to this story. The real message is for us all to be strong. Whether we’re the Slayer or not, whether we feel invincible, whether the odds look to great, whether it seems pointless. And yes, I’m a sucker for the slightly cheesy montage of young girls around the world standing up to their bullies and their abusers as they feel the power of the Slayer coursing through their bodies, but I just can’t help it. It makes me feel strong. And that’s why the final speech in Chosen is the best bit of Buffy the Vampire Slayer season 7.