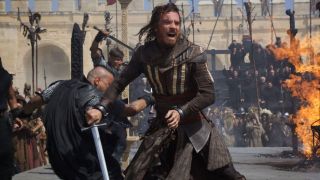 Hood up. Eagle vision on. It's finally time to watch Michael Fassbender in action in this year's Assassin's Creed. It might be a time period we've never seen in the games but Macbeth director Justin Kurzel has managed to get in plenty of 360 viewpoints, eagles and free running action to make us feel at home in the Spanish Inquisition.

Fassbender stars as both present dweller Callum Lynch and his Spanish ancestor Aguilar De Nehra and is joined by Ariane Labed as fellow Assassin Maria as they battle their way across sunny rooftops. And yes, that claw makes a serious upgrade to the animus. Trailer music aside, I have a seriously good feeling about this.

If you're really not a fan of that background music, never fear - we've fixed it.