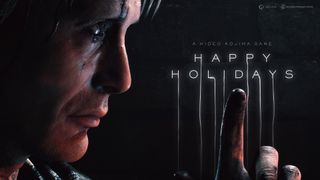 Christmas can only mean one thing: seasonally rendered versions of your favourite game characters smiling next to snowmen or handing out presents. Unless you're Hideo Kojima, in which case it looks more like Mads Mikkelsen is planning to kill you before New Year.

Here's a roundup of some of our favourite messages from studios around the world to wish you a merry Christmas. Enjoy.

From our family to yours, wishing everyone #HappyHolidays. pic.twitter.com/WWOj3exXB1December 21, 2016

From our family to yours, happy holidays! pic.twitter.com/p2WimuxCqqDecember 21, 2016

Have a happy, safe, calculated holiday season, from the Psyonix family to yours! pic.twitter.com/WGzyUdRKKmDecember 21, 2016

Wishing everyone #HappyHolidays and looking forward to getting #HorizonZeroDawn in your hands on Feb 28th. pic.twitter.com/SMmMWb9NgVDecember 20, 2016

Much of the country feels like it's been blasted by this holiday-themed Ratchet weapon: pic.twitter.com/aww7e6ehJXDecember 19, 2016