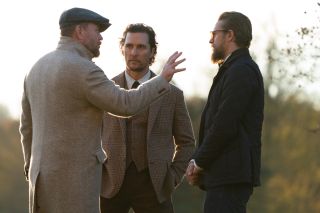 “This is a return to my roots,” Guy Ritchie tells our sister publication Total Film of The Gentlemen, a crime caper bursting with banter and bickering, blackmail and bribery.

After a run of studio behemoths – two Sherlock movies, The Man From U.N.C.L.E., King Arthur: Legend Of The Sword and Aladdin – Ritchie’s 11th feature revisits the colourful territory of his breakout hits Lock, Stock And Two Smoking Barrels and Snatch. “It’s on that frequency, but 20 years later,” he continues. “So everyone evolves – well, hopefully evolves.”

“It’s a good cast but we just asked people, and they were around,” shrugs Ritchie modestly. “Everyone wanted to do it, so I knew that everyone was into it. I didn’t have to explain things to them. They got the joke.” And Grant?

The trailer makes it clear he’s having a ball playing against type… “I think Hugh Grant is a better actor than Hugh Grant thinks he is. Now, he hasn’t said that to me, but I am immensely confident of his ability, his intelligence, and the roles which he takes. Hugh has his spin on things, and it’s a sophisticated spin. I just like watching him, and I like working with him, and I wish he’d work more.”

You can read the full interview with Ritchie in the latest issue of Total Film magazine, on shelves now. Meanwhile, The Gentlemen reaches cinemas January 24, 2020.