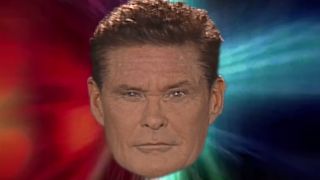 Did you watch that incredible Guardians of the Galaxy 2 disco music video, "Guardians Inferno," starring the main cast and David Hasselhoff? Well if not, here it is one more time before we get into the story of its creation, just to remind you of its greatness:

GotG 2 director James Gunn shared his explanation of the video's inspirations and creation process on Facebook this week, and it's as fun to read as the video is to watch.

According to Gunn it all started more than two years ago. He and his friends were fans of a disco version of the Star Wars theme (which actually took the number one spot on the Billboard charts in 1977), as well as a YouTube video of the song being performed on the British television show Top of the Pops. Specifically, this one:

Because, you know, nothing says ‘Star Wars' like cowboys doing lasso tricks, sexy cowgirls, flapper costumes, the superimposed image of men on motorcycles looking bemused, and um... is that a... sexy pope at the end? Point is, Gunn wanted to make an homage to this bizarre piece of cinema and musical history, and that's where the idea for Guardians Inferno started.

"But then life happened. After all, I had a movie to make – storyboards to draw, Living Planets to cast, and robotic brothels to build," Gunn wrote. But the idea wouldn't go away, and Gunn kept plugging away, writing the lyrics in the back of a car on his iPhone. He and composer Tyler Bates produced a demo and set out to recruit Herr Hasselhoff.

"David Hasselhoff and I worked together on Vol. 2 for one day, but we made an instant bond. He’s a unique and amazing person, and he’s everything you imagine Hasselhoff to be, only better. The Hoff and I sat down to lunch, I pitched the idea to him, and he excitedly agreed to do it," Gunn said. "He agreed before realizing it was essentially a rap, and the first couple lines included the phrases 'Procyon Lotor' and 'infantilized sequoia.' And even though one of the more difficult moments in my career was getting the Hoff to correctly say 'infantilized' in the correct off-rhythm, the Hoff just freaking killed it in the recording studio."

As for the other cast members, Gunn said that the original plan didn't involve the movie's cast, but everyone volunteered their time to be involved - none of the actors were paid to put the video together, they simply did so because Gunn and his friends were able to convince them. "I guess we HAD to ask Rooker because Rooker dancing is like a car accident on the side of the highway you just can’t look away from. Who doesn’t want that in their video?" Due to scheduling conflicts, Chris Pratt's part had to be shot remotely on the set of Jurassic World 2. So just keep that in mind when you see Pratt chasing down dinosaurs next year; between takes, he was dressing up as a robot for a disco music video.

Possibly the hardest part? Coming up with a name. Gunn wrote, "I was pretty high on 'The Winner of the 2017 Academy Award for Best Song,' but Marvel legal weren’t too sure of the legality of this."