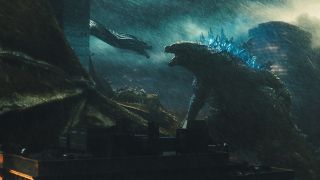 The king of monsters is coming to the game that helped start the battle royale sensation. That's right, Godzilla is coming to PUBG in a special crossover event to help promote Warner Bros. new movie.

The limited time event will let you track prints left by the titan in order to collect items based off the upcoming Godzilla: King of Monsters, a sequel to the 2014 Godzilla movie. It's all part of a free update coming sometime this month.

Like other events, this crossover should include a special limited time mode and a variety of event skins. We might even get the chance to see Godzilla—a special sight that would give these deserted maps some energy.

Playerunknown's Battlegrounds is still going strong with over 100 million players and a steady stream of new content. PUBG Mobile recently featured a special Resident Evil 2 crossover where players had to survive against a horde of zombies through the night. They also had a Mission Impossible themed event with Paramount Pictures in the middle 2018 around the time Mission Impossible: Fallout came to theaters.

PUBG already had a similar event during Chinese New Year where players had to follow clues to hunt down a dragon, although that was restricted to fans in China. Some players have already started to collect Godzilla themed shirts and spot graffiti from the movie in various spots on the map, so the event can't be too far off. The movie releases on later this month on May 31.

Has Playerunknown's Battlegrounds whet your appetite for eliminations? Here's 13 awesome Battle Royale games like PUBG you should check out.