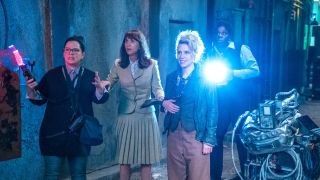 Paul Feig's movies have a history of arriving on Blu-Ray in extended and unrated editions, and it looks like Ghostbusters will be getting the same treatment. The theatrical cut of the reboot - which is finally making its cinematic debut this weekend - clocks in at 116 minutes, but we can expect some more footage in a few months:

"We actually just finished [the extended cut] so it’s about another 15 minutes longer, but I will also include a lot of the deleted scenes and extra material that we have on the DVD", Feig explained to Collider. "It’s actually some stuff that we finished the VFX on just because we wanted to have this nice-looking extended cut too, so it was very kind of the studio to let us finish all of that".

While we'll be getting to see those extra 15 minutes when the film comes out on Blu-Ray, there's a ton of footage that will never see the light of day:

"The editor’s first cut was 4 hours and 15 minutes, and I trimmed that down to a slim 3 and a half hours. We generate a lot of stuff and I always wanna have all the underpinnings of a big, emotional story, and because of that it just added a lot of extra scenes that as you’re going through, you know you have to make a lot of choices because I knew I had to bring this down under two hours. You just start weeding and saying, ‘What do people want to delve deeper into and what do we wanna just kind of skirt through and get to the fun parts?’"

Having seen the film, I'm not surprised to hear this; At times the editing in Ghostbusters' theatrical cut is very inelegant, and some of the themes Feig is going for don't resonate as strongly as they should. Thankfully, there's still a lot of cinematic fun to be had in those 116 minutes, and you can see it for yourself when the film opens on Friday.