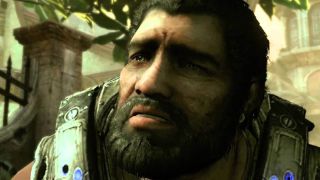 Microsoft has detailed Gears of War 4's pre-order bonuses and all I have to say is … really? Nobody in marketing suggested the vastly superior "Dom of the Dead" over the comparatively plain "Zombie Dom" as the name of the skin pre-order customers unlock in the game's multiplayer? For shame. At least those who pre-order will also get two gold weapons, Old Man Marcus, and Tomorrow Anya to make up for this wordplay oversight.

While "Old Man Marcus" is pretty straightforward (it's Gears series hero Marcus but, you know, old) "Tomorrow Anya" is wearing a yellow-and-white ensemble designed to evoke her appearance in the Gears of War 4 TV spot (which is also, not-coincidentally, called "Tomorrow").

Microsoft warns this particular part of the pre-order bonus is limited time only, so if you want those games, you'd better hop to it.

Seen something newsworthy? Let us know at news@gamesradar.com!