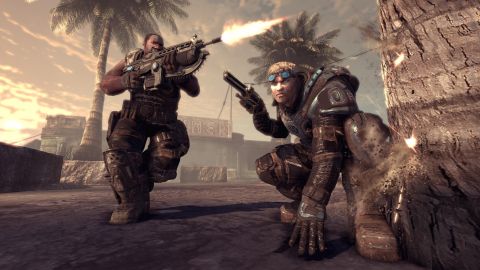 There’s a moment at the end of the second act of Gears of War 2 where, all of a sudden, the infamous Unreal Engine 3 ‘Meatcube’ demo makes sense. At that point, you’ll realize why Epic thought it so important to show Marcus Fenix blasting around a giant hunk of meat at the Games Developers Conference, and just why getting those wibbly-wobbly meat physics right were so important. Maybe at that point you’ll wonder whether the new power of Unreal Engine 3 is behind the design for Gears 2, or whether the design of Gears 2 is what made Epic evolve Unreal Engine 3, but whether the chicken or the egg came first, it’s clear throughout that there’s new technology behind the game.

The meaty climax to Act 2 is an obvious demonstration of the engine’s new power, but the signs are there throughout – meaty chunks can be shot out of the bigger Locusts, water and blood flows and pools more realistically, the environment splinters and shreds under sustained fire, and every act has at least one epic battle against swarms of Locusts. It’s all technology shown off at GDC 2008 and it has made Gears 2 a very different game.

In truth, nobody wanted Gears 2 to be a whole new world. Gears of War worked. The cover system worked, the guns worked, the linear stages worked, the roadie run worked, and the chainsaw on the end of the Lancer worked. Gears was never broken, and Epic have elected not to fix it, but that’s not to say the new tech hasn’t led to some new ideas. Gears 2 is a natural evolution, perfecting the systems which almost worked, scrapping the systems which never worked, and adding new systems – all of which work brilliantly.

What’s most surprising isn’t the things Epic decided had been ‘wrong’ in the original and ‘fixed’ in the sequel; it’s in the things that were almost right in Gears, and have been perfected in Gears 2. Suddenly, your AI partners are worth keeping alive – standing and fighting like men rather than collapsing and dying immediately upon glimpsing an enemy, and coming to your aid while you’re down. The roadie run is more precise – you’ll stick to the wrong cover less and snap to the right cover more. That cover system too, is better – you’ll snap in and out more fluidly and can take advantage of the environmental damage to whittle your enemy’s cover away and nail a crafty headshot. The same applies to the executions; it was always fun to stamp and squash a head, and Epic have spent the last 24 months perfecting the meaty squish with their updated engine, adding new animations and options for ways to dispose of (or make use of) a downed foe.