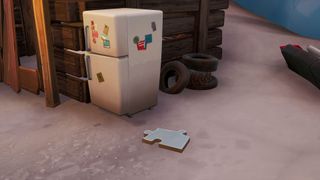 If you're not a Fortnite veteran then you may not remember the Fortnite Jigsaw Puzzle Pieces that originally appeared back in Season 5, but if you do then one of the Fortnite Battle Pass Challenges for Week 8 of Season 8 may look familiar. These hidden collectibles are distributed around the island under bridges and in caves, and make a distinctive rattling sound as you get close to them. There are 16 of these jigsaw pieces in total, although you only need to search seven of them to complete the Weekly Challenge and reveal the solution to the puzzle. To help you on your way, we've found all of the Fortnite Jigsaw Puzzle Piece locations, so you can grab the ones easiest for you to reach.

We have a complete walkthrough of all 16 Fortnite Jigsaw Puzzle Piece locations in our video below:

As we mentioned previously, the Fortnite Jigsaw Puzzle Pieces make an obvious rattling noise when you're near them, so as soon as you approach a bridge or cave that's hiding one then you should know pretty quickly. A few of the caves are fairly tucked away, so take a look through the images if you're not sure where to go. Here's the full list of locations:

And here's each one marked out to make them easier to find:

In the umbrella shaped excavation southeast of The Block, at the bottom of the handle behind a wooden wall.

In the cave behind the buildings on the east side of Lazy Lagoon, behind some planks.

Southwest of the volcano, between Sunny Steps and Lonely Lodge, inside an inaccessible temple entrance.

Directly south of the main building in Lonely Lodge, tucked in a cave where a chest often spawns.

In the cave under the northeast corner of Tilted Towers, above the river.

Inside the road tunnel running underneath Tilted Towers, behind a truck.

Inside the underground area of Shifty Shafts, in the northeast corner.

Under the west side of the orange bridge found southeast of Shifty Shafts.

Inside Trog's cave in the southwest corner of the snowy biome, next to a fridge.

Under the west side of the covered wooden bridge, to the northwest of Lucky Landing.

In the cave between the knife and fork shaped excavations to the northwest of Fatal Fields.

In the short tunnel directly east of the main corn field in Fatal Fields.

Inside the slightly more substantial cave northeast of Fatal Fields, just north of the previous tunnel.

Under the wooden bridge found to the east of Salty Springs.

Under the metal side of the broken bridge opposite one of the Fortnite Pirate Camps on the edge of the desert biome.

Under the road bridge southwest of Paradise Palms, with a truck directly on top.

Have you found the Fortnite telephones yet and made the required calls to Durrr Burger and Pizza Pit?