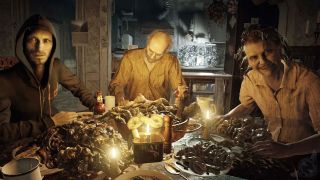 Somehow it’s already the end of 2017. We have no idea how it happened, but it seems like forever ago that all of these games got released. Luckily for us, thanks to the months that have flown by since their release and the fact that there are tons of Cyber Monday gaming deals flying around, those games from early 2017 have all been slashed in price.

Now you can pick up four of 2017’s best games for under £60, and there’s something for everyone here. A bit of horror, some FPS RPGs, an MMORPG, and a story-heavy singleplayer extravaganza. Have a gander at the titles below to pick up a cross-section of 2017’s best games!

If these aren’t to your taste, check out the best Cyber Monday Xbox One deals.

Prey for £11.99 (was £19.49): Explore the ruined TALOS-1 in this FPS RPG, and find out exactly how the mysterious Typhon aliens destroyed the miraculous space-station - and where you fit into it all. With devious variations of the camouflaging mimic, you can choose to embrace these alien powers - or try to retain as much of your humanity as you can...

Elder Scrolls Online: Morrowind for £10.99 (was £17.99): Revisit the smoky, intriguing land of Morrowind in ESO’s latest expansion. With enough sidequests to keep you busy for months, ESO is pretty much your fix until Elder Scrolls 6 gets announced - and for you MMORPG fans there’s no better game to dedicate your time to.

Resident Evil 7: Biohazard for £19.99 (was £29.99): Try out the game that reinvented Resident Evil and find out why it’s the most haunting horror game of 2017. Turns out being stuck in a dilapidated house with a grotesque family makes for an incredibly unsettling experience. Who knew?

Dishonoured: Death of the Outsider for £15.99: Have a go at killing a god in Dishonored’s latest instalment. Putting you in the shoes of Billie Lurk, it’s another beautifully sinister exploration of the murky world of assassination and power politics, and is a stabby delight.