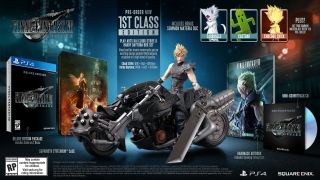 The Final Fantasy 7 Remake is going to be an enormous game. Irresponsibly enormous, honestly. Square Enix says the first episode, which is just going to cover the Midgar region, will deliver a full game's worth of content, and that's barely scratching the surface of the original three-disc game. I guess if you're making an irresponsibly enormous game, you may as well make a lavish collector's edition, and Square Enix most certainly has. The Final Fantasy 7 Remake 1st Class Edition goes for an eye-watering $330 ($250 more than the Deluxe Edition), and most of that money is going into its big-ol' Cloud figure.

This is 400 grams of Cloud, people. Do you know how many pounds that is? Because I didn't and had to Google it. It turns out that's almost a pound of Cloud, and coupled with his 1,500 gram motorcycle, that comes to about four pounds of posable protagonist. I don't know the conversion rate for dollars to protagonist, though, so you'll have to decide for yourself whether that's a good deal. For what it's worth, this edition also comes with a nice SteelBook case, the game on two discs, a hardback artbook, and the soundtrack. More importantly, it also comes with this:

Apparently, these are summoning materia which you can only get by pre-ordering. Great, love to summon. Carbuncle? Adorable. Cactuar? A classic. But what is going on with that Chocobo? Now, I've seen some Chocobos in my day. I've seen Chocobos in fields, dungeons, and races. But I've never seen a punk rock super saiyan Chocobo, let alone a punk rock super saiyan Chocobo Chick. This thing is going to have so much attitude when it grows up. It's already putting Cloud's hair to shame. I can't wait to see its in-game model. Square Enix, please let it have a ridiculous crest of feathers just like this.

We got a closer look at the Final Fantasy 7 remake combat system during a recent E3 2019 demo.