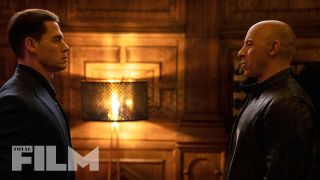 The Fast and Furious saga has always had the F-word right at the centre: family. But where Dominic Toretto (Vin Diesel) and crew usually stand by the fam until the bitter end, Fast and Furious 9 – officially titled F9 – is set to shake things up.

In just one of the twists revealed in the new Fast and Furious 9 trailer, John Cena was revealed to be playing Dom’s long-lost and, crucially, evil brother. Yep, Jakob Toretto has sided with big bad Cypher (a returning Charlize Theron), and you could say Dom’s pretty furious about it.

“The theme that we’ve been playing with up until this point has been the family that you create with people from all walks of life, the family that is not blood,” star Vin Diesel tells our sister publication Total Film magazine in their new cover feature. “What makes the story of Fast 9 so fascinating is how that altruistic concept could neglect the family defined by blood. That’s where this story goes.”

You can see look at the newly reunited Toretto brothers in the exclusive new image from Total Film, above, as well as a look at Dom on the road below.

“Jakob is a bit of a loner,” Cena tells Total Film in his first official interview about the game-changing role. “In being a bit of a loner, he has to craft all the skills that it takes. He’s skilled in performance driving, he’s skilled in combat, he’s skilled in espionage and covert tactics. You see how the Fast family operates. Each member has a distinct set of skills, and that’s why they can make the impossible, possible. Jakob possesses all those skills, which makes him an insurmountable threat.”

Keep an out for the new issue later this week. Diesel shared a first look at the cover with his Twitter followers: