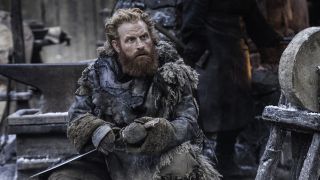 Warning: If you haven't watched Game of Thrones season 6, episode 4 yet, there's lots of spoilers below. Leave now and save yourself!

This week's Game of Thrones saw fans dreams come true as two of the Stark siblings were finally reunited, but it also gave us something we never knew we need. The ultimate Game of Thrones power couple.

If you've seen the episode, chances are you know exactly what I'm talking about. When Sansa entered Castle Black to find her brother, she brought with her Brienne of Tarth and someone (TORMUND GIANTSBANE!) definitely took notice. Later on in the episode their eyes locked across the dinner table and Tormund gave Brienne his best meat flirting face. It was sexy and weird.

Naturally, the internet went crazy with the idea that Brienne and Tormund would get it on and have lots of babies who would grow up to become the most skilful/dangerous fighters in all of Westeros. Keep on scrolling for some of the best Twitter reactions to Briemund. Or maybe Torenne?

when a girl rides in with a 6 foot frame and Valyrian steel in your face, YOU GET SPRUNG #GameOfThrones pic.twitter.com/FFitAKkamkMay 16, 2016

If a man looked at me the way Tormund did Brienne while eating that raw chicken, I'd lose my clothes faster than Dany in fire #GameofThronesMay 16, 2016

I think Tormund sexily eating a large hunk of meat at Brienne is my favorite thing to happen in this episode of #GameofThrones.May 16, 2016

Who wouldn't want Tormund to meat flirt with them with a face like this! May 17, 2016

Also, if Brienne and Tormund get together, can Jaime show up and act like a petty, jealous fool..May 16, 2016

love the dragons and stuff but if the rest of this season turns into a brienne/tormund romcom I won't complainMay 16, 2016

Ten minutes into "Castle Black & Chill" and he gives you this look... #gameofthrones #castleblackandchill pic.twitter.com/sDj0A2H03kMay 16, 2016

I look forward to reading all your Brienne/Tormund fanfic in the morning, guys.May 16, 2016

Tormund and Brienne already have plenty in common. They're great at killing things, and they've both dealt with a bear. #GameofThronesMay 16, 2016

Tormund crushing on Brienne has gotta be the best thing ever.. #GameofThrones 😍 pic.twitter.com/ETeWIkmViyMay 16, 2016

Are we gonna talk about that raw sexual tension between Brienne and Tormund? #GameofThrones #BriemundMay 16, 2016

If only you wanted delicious kale as much as Tormund wants delicious Brienne. #gameofthronesMay 16, 2016

Ladies, find someone that looks at you like Tormund looks at Brienne. #GameofThrones pic.twitter.com/Kp4JxiwhHSMay 16, 2016

I think Tormund likes what he sees on Brienne's horse. #GameOfThronesMay 16, 2016

Me when Tormund subtly flirted with Brienne over a slab of meat. #GameofThrones pic.twitter.com/8lEOJdb3FEMay 16, 2016

hi @GameOfThrones i would like an entire romantic comedy about tormund and brienne thanks for your time #GameofThronesMay 16, 2016

Tormund and Brienne is the relationship we never knew we needed. #GameOfThrones pic.twitter.com/YggBbgCTUjMay 16, 2016

Life goals: Sit across from Tormund while he eats a chicken leg and looks at me the way he looked at Brienne. #GoTs6May 16, 2016