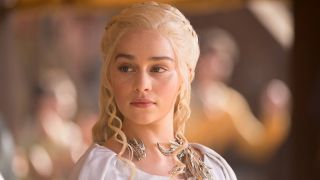 Game of Thrones season 8 spoilers are rarer than a Martell leaving Westeros with all of their eyeballs. So, when we get a little nugget of foreshadowing from one of the main cast – Dany herself, Emilia Clarke – we know it’s something worth treasuring. The Mother of Dragons, Breaker of Chains etc etc etc has filmed her final Game of Thrones scene – and her reaction sure is something. Possible spoilers follow…

“It ****** me up,” Clarke tells Vanity Fair of her character’s final on-screen moments. If that doesn’t leave you reaching for the box of tissues, just you wait.

She could’ve left it there and there’d still be every reason to be concerned, but no. Emilia Clarke had more to say: “Knowing that is going to be a lasting flavor in someone’s mouth of what Daenerys is…” Clarke says, before trailing off.

That’s… dark. And probably the biggest tease we’ve got about the final season yet, if I’m being honest. It certainly sounds like Dany isn’t going to be carried out of King’s Landing on a throne while the crowds lay cheering at her feet. Nope, this is either going to be a case of her being carried out in a coffin or her dragons doing the heavy lifting with some vengeful fire-themed deaths. Mmm, crispy.

Dany’s legacy, then (and her final moments on-screen after eight seasons on Game of Thrones) might just be tainted at the very end. What’s it to be: death, destruction… or domination? Let us know what you think will happen in the comments!

A certain Daenerys Targaryen features heavily in our collection of Game of Thrones season 8 theories, so give that a gander while you wipe away the tears.