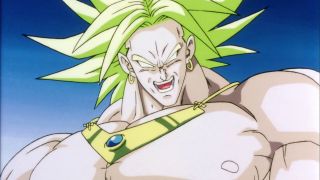 Bandai Namco and Arc System Works have confirmed the first two DLC fighters coming to Dragon Ball FighterZ, and long-time fans should be pleased. Broly, AKA The Legendary Super Saiyan, and Bardock, AKA um... Goku's dad... will arrive in the game at an undisclosed point in the near future. Until they're available to play though, you can watch these 8-second teasers showing off the characters' intros (and don't worry, it's not you, there really is no sound for either of these).

If you're not familiar with either of these two, let me break 'em down a bit for you:

Broly is a Saiyan, like Goku and Vegeta; a humanoid from another world who loves fighting and creating mayhem. However, where Goku and Vegeta had to train obsessively to reach the power level of a Super Saiyan, Broly was practically born with it.

That may not seem like such a big deal nowadays when half of the Dragon Ball cast has more transformations than you can count, but back in the day, Super Saiyans were so legendarily powerful that 1) they were considered a myth, and 2) when it looked like one might possibly arise, longtime villain Frieza blew up the Saiyan's home planet in an effort to wipe out the entire race.

Unlike more methodical villains, Broly is single-minded in his hatred for Goku, and attacks like a berserker. He is also, quite literally, insane. Because of his massive power level and the fact that his ascension preceded Goku's own, he's sometimes referred to as "The Legendary Super Saiyan."

Simply put, Bardock is Goku's dad - which explains why he looks so much like our lovable hero. But where Goku is known for being kind, easy-going, and gregarious, Bardock is a bit of a bastard. He lived as a low-class mercenary, wiping out populations as ordered by his superiors and Frieza.

However, after being gifted (or arguably, cursed) with the gift of precognition, Bardock begins to see how he has been manipulated. And while he's still quite the jerk, he's a jerk who's loyal to his comrades and family. Thus, in a doomed effort, he rushes to save his friends and planet from Frieza's betrayal, only to be among the first disintegrated by the villain's energy blast.

Earlier this year, a supposed leak was posted to the ResetEra forums, claiming that the upcoming DLC fighters would include Broly, Bardock, Zamasu, Vegito, base form Goku, base form Vegeta, Cooler, and Android 17. With Broly and Bardock now confirmed, that rumor is looking more likely to be true.

However, others claim that Zarbon and Raditz will be added to the roster, so there's some uncertainty over whether the leak actually revealed playable characters or just lobby avatars. Personally, I've always liked Videl and Super Saiyan 4 Goku, but I know I'm in the minority on those. In any case, more fighters is definitely good news. Just be sure to give me at least seven episodes to power up, okay Bandai Namco?