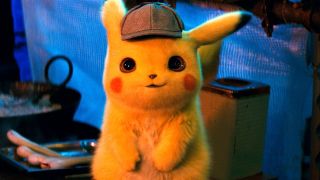 Detective Pikachu 2 is in the works, several months before the original film is set to hit theaters. According to The Hollywood Reporter, production company Legendary has brought on Oren Uziel to create a script for the sequel. Uziel's other screenwriting credits include 22 Jump Street, The Cloverfield Paradox, and Sonic the Hedgehog.

We don't yet know what direction Uziel plans on taking for the sequel's script. Detective Pikachu the First has only had that one trailer at this point - I wouldn't know what to make of a synopsis for a sequel yet. Ryan Reynolds has the eponymous role as the talking, crime-solving electric mouse in the upcoming Detective Pikachu film while Justice Smith plays his human pal/client. They join up to find Smith's missing father, so maybe the sequel will bring them together again to solve a new mystery? I hope it has a realistic Mimikyu too, and that it also gets a trading card.

Detective Pikachu is based on a Nintendo 3DS game that first came out in Japan in 2016 (international versions followed in 2018) but you don't need to be familiar with that specific source material to enjoy the film. You just need an appreciation for semi-realistic Pokemon designs, ample fur effects, and the joyful incongruity of Pikachu's cuteness contrasted against Ryan Reynolds' gruff P.I. performance.

The first film, officially titled Pokemon: Detective Pikachu, will hit theaters in the US and UK on May 10, 2019. Assuming all goes well, its sequel will likely follow a couple years later. Who knows, perhaps in another decade we'll look back at this as the opening salvo of an all-new Pokemon Cinematic Universe?

See more to look forward to in our list of the upcoming movies for 2019 and beyond.