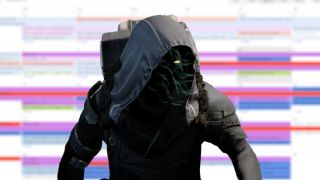 Bungie has published an events calendar for the first month of Destiny 2. If you want to make sure you don't miss any of the big happenings throughout September (or if you were just really curious about when Xur would show up again) all the answers are right here.

I've included the official image from Bungie below (click to enlarge), along with an easy-to-read transcribed version. They're full of jargon so I've also included a quick glossary of terms beneath that. Enjoy your first month in the new world, Guardians!

Update: Bungie changed the mode for the Trials of Osiris event beginning on September 29 from Survival to Countdown. I've revised the calendar accordingly.

Update 2: An issue with Nightfall mods has led Bungie to change the Week 2 Nightfall: it will now feature the Prism mod again instead of Momentum. The calendar has been updated.

Trials of the Nine (Mode: Countdown, Map: Emperor's Respite)
Xur returns with some more exotics for sale (where does Xur keep getting all these exotics)

Faction Rally: Bungie hasn't explained what this will be yet. The little teaser image is composed of the icons for Dead Orbit, New Monarchy, and Future War Cult, so Faction Rally will definitely tie into the three PvP groups somehow.

Flashpoint: A weeklong PvE challenge focused on a single location, giving even solo players a chance to collect high-end rewards.

Guided Games: A system that allows solo players to queue up for high-end challenges like Nightfall and Raids. Instead of being matched with a group of randos, you'll join a party largely composed of clanmates who will (hopefully) show you the path to victory.

Nightfall: An extra-challenging Strike that's playable for a week, with unique modifiers that affect gameplay.

Raid: Six-player missions with hours worth of combat, puzzles, and platforming. Raids tend to be the most difficult, but also the most rewarding, parts of the game.

Trials of the Nine: The new name for Trials of Osiris, a weekend-long PvP competition. We don't know all the details yet but it will probably work a lot like ToO did, with smaller squads and progress-tracking scorecards that can be turned in for rewards.

Xur: An odd but friendly(?) tentacle faced person who comes back every weekend with a fresh crop of exotic gear to sell in exchange for legendary shards.