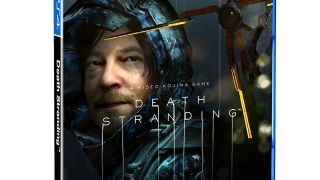 The Death Stranding box art was officially revealed at San Diego Comic Con 2019 over the weekend, and it might be the least confusing thing about the game we've ever seen. Game director Hideo Kojima hosted a panel at the convention - where he also revealed that Kojima preferred Mads Mikkelsen over Keanu Reeves for the role of Cliff - and proudly displayed the Death Stranding box art for everyone who attended the panel to see. Fortunately, it wasn't one of those annoying convention exclusives - he put it on Twitter too.

Regular one on the left and steel book one on the right. pic.twitter.com/ub5Wsgr84rJuly 21, 2019

The two versions of the box art show main character Sam (as played by Norman Reedus) in what looks like before/after scenario: in the normal edition art he's wearing his full porter outfit with the hood up and his shoulder-mounted monster detecting arm thing deployed. The Steelbook version shows him with his hood down, his face covered in tarry muck, and the detector thing gone. It's the same pose in both images.

The thing that makes Sam unique is that he can somehow come back from being eaten by the invisible monsters that haunt Death Stranding's world, but it's still a harrowing experience that leaves him much worse for wear. I wonder if that's the before/after here. Or maybe he just fell in the mud, I dunno. Slip and fall accidents are probably still a thing in the post-apocalyptic future.

You'll be able to enjoy the Death Stranding box art on your own shelf after the game comes out on November 8, 2019.

See how weird things are about to get with our roundup of Death Stranding plot theories.