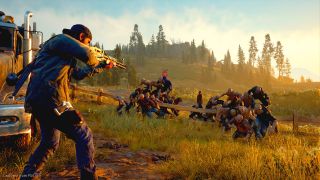 If you’re wondering how to kill a Horde in Days Gone, then we’ve got some advice. Hordes are like bosses in Days Gone; some consist of a hundred or so Freakers, while you’ll also find some that can approach the thousand mark. During the day, Hordes sleep in enclosed locations like caves and abandoned train carriages, but at night they venture out into the open world. Taking them down can be tricky, so here are 10 tips for how to kill a Horde in Days Gone.

1. Look for bottlenecks and choke points

Hordes are huge and tough, but one advantage you have is that you can fit through much smaller gaps. Look for alleyways between buildings and holes to crawl through, so it slows them down, then you can throw explosives and spray bullets at them when they’re narrowed.

2. Fight them during the day

As we mentioned, Hordes sleep during the day. This means that they’re all in a tight, enclosed space to begin with. Perfect for explosives. If you find their hiding spot, you can take out a lot of them with a couple of grenades as they clamber over one another to try and get to you.

3. Make a note of nearby exploding barrels

Hordes are often found in areas with explosive barrels nearby, so make sure you’re leading the Horde past them when you’ve got their attention. A single bullet can take out a whole bunch of them at once.

4. Place traps before you alert them

Before you get their attention, place Proximity and Remote Bombs in along your route. You’ll be able to take down hundreds of them without even firing a shot, especially if you get them down in the aforementioned tight spaces. Just don’t be too close when the Proximity Bomb gets triggered!

5. Upgrade your Focus to the maximum

The utility of Focus can not be overstated. Against Hordes, Focus is often the difference between life and death because you can line up your shots and fire one bullet per Freaker head, rather than spraying wilfully and getting loads of body shots.

When Horde hunting, there’s little point in having semi automatic guns like snipers and pistols. You’re much better off grabbing an LMG (either the MG45 or RPD), assault rifle/SMG (MWS/Chicago Chopper are our favourites), and the SMP9 automatic sidearm to deal with the remaining few stragglers. The LMG especially can be useful for taking down the main body of the Horde.

7. Craft as many explosives as you can

Throwables are your best friend when taking down a Horde. Molotov Cocktails, Frag Grenades, Attractor Bombs - anything you can throw (other than rocks) will be useful for eliminating a Horde. Even Smoke Grenades and Flashbangs disorient them for a few moments and give you a few extra seconds.

8. Attractors (and Attractor Bombs) are crucial

With the larger Hordes, you can very quickly get overwhelmed as they sprint at you. Attractors - and Attractor Bombs - can alleviate some of the pressure. It won’t divert all of their attention, but you can likely kill the few still on you then chuck a grenade at the ones surrounding the Attractor before it finishes.

9. Get the Under Pressure skill

Using Focus is important for killing Hordes, but make sure you’ve got the Under Pressure skill in the Ranged category. This means that reloading during Focus time will pause the timer, so half of your time in Focus isn’t spent reloading.

10. End of the game unlocks all Hordes on the map

Finally, you actually unlock all of the Horde locations on your map once you reach the end of the game. We’d recommend taking at least a few on before then, but for the bulk of your Horde hunting, wait till the very end of the story so you’ve got more equipment and you know the general area Hordes can be found in. There's also quite a few more added at the end too.

Check out the below video for 13 things I wish I knew before playing Days Gone!