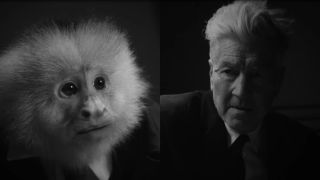 Surprise! To celebrate director David Lynch's 74th birthday, Netflix has uploaded a new short film from the auteur filmmaker, in which he interrogates a talking monkey. Yes, it's as weird as it sounds.

The short – titled What Did Jack Do? – sees Lynch's smoking detective exchange barbs with the animal, named Jack, at an apartment near a train station. According to the credits, the monkey is played by Jack Cruz, who appears as himself. The film comes it at just over 17 minutes, and makes for a remarkably strange watching experience.

What Did Jack Do? was filmed in 2016, and screened at Lynch's New York event, Festival of Disruption, in 2018. However, it has never previously been available online before, and is essentially a Netflix original. Anyone with a subscription and a passing interest in Lynch's filmography should search the short out immediately.

Birth.Movies.Death points out that, a few months ago, rumours swelled that Lynch and Netflix may be working together, as the director was spotted around the streaming service's HQ. Unfortunately, nothing has been announced as-yet regarding any new releases, though the release of the short film certainly shows that they have a working relationship. Whatever the case, it's exciting that Netflix are trying out weird and wonderful things like releasing a surreal short on one of our favourite filmmaker's birthdays.