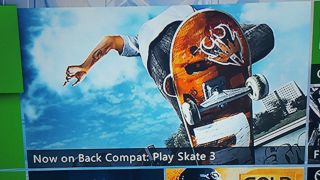 ***UPDATE***: Skate 3's 'in progress' note on the Xbox 360 backward compatibility wish list has been in place for a few months, GR+ has been informed, so this note isn't confirmation by itself – but the emergence of the dashboard image does suggest Skate 3 in imminent, when both items are viewed in tandem***

The Xbox One dashboard has outed Skate 3's imminent arrival on backwards compatibility, with confirmation from an Xbox administrator, Mister Retr0 on xbox.com. It's certainly got Reddit excited.

Skate 3 currently has 38,904 votes in the Xbox 360 backwards compatibility wish list on the Xbox website, above titles like Dishonored, Fable Anniversary and Halo ODST; with its existence confirmed by an official Xbox administrator, Mr Retr0.

For those who haven't played EA's Skate series, its appearance on current-gen consoles is long overdue: a deep, physics-based, emergent world; high on skill, spectacle and gaffes; ideal for streamers and YouTube highlight reels. Skate 3 currently has 80% critical and user reviews on Metacritic, even if some folk only know it from popular YouTuber's PewDiePie's comedy showreels of the game's maddest glitches, from back in 2014.

The popularity of Skate 3's YouTube glitch comedy kept the game in the charts long after it came out and, in 2014, retailer GAME actually asked EA to repress it (when it was four years old at the time) due to customer demand.

So, good news, even if the wait for Skate 4 goes on. FWIW, EA, if you're worried about releasing that as a full-price title, you can trial a digital download-only F2P single 'map', or budget-price release, and then make all your money on extra locations, hats, decks, video filters, physics enhancements and… look, you get the picture.