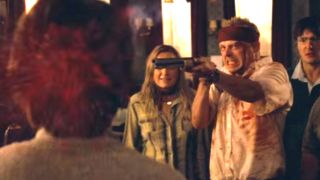 I warn you now. Turn away. Stop reading and move on, safe in a world of unruined film watching. If you don’t already know about Chekhov’s Gun then you’re one of the lucky ones. It’s a simple rule of storytelling that will, once you learn it, spoil every show and movie you ever watch.

Still here? On your head be it.

This is the rule behind Chekhov’s Gun:

“Remove everything that has no relevance to the story. If you say in the first chapter that there is a rifle hanging on the wall, in the second or third chapter it absolutely must go off. If it's not going to be fired, it shouldn't be hanging there.”

It’s from a famous Russian playwright and author called Anton Chekhov. He was considered a master of short fiction and so he had some firm ideas on how to do it. A shorter version of his rule would be this:

‘Don’t stick anything in your film unless there’s a reason for it.’

It makes sense right? Why would you have anything in a film without it serving a purpose?

Okay, there are exceptions.

The problem with this rule is that once you get a feel for it and understand it, it’ll ruin everything. I meant it when I said stay away if you don’t already know about this because it really will collapse the best told stories into a series of simple set ups and resolutions that blart out of the screen like narrative gongs going off.

You’ll start to notice offhand comments and casual gestures to some piece of apparently unimportant equipment. “Well, I can drive that loader. I have a level 6 rating,” says Ripley in Aliens, before breaking out some badass robo-piloting skills. ‘Wow she’s cool,’ you probably thought. ‘I definitely won’t see that referenced again for any reason whatsoever.’

Another example happens in The Dark Knight, when Bruce Wayne accidently fires out the wrist blades from the new batsuit gauntlets. That’s what happens when you don’t read the instructions and almost certainly won’t come in useful again. But at least we know they exist for… no reason.

However, the king of heavy handed Chekhov’s Gun deployment has to be James Bond and Q’s menagerie of very specific gadgets. Here’s a watch that turns into a saw 007. Let’s hope you don’t end up needing to cut anything, say, around your wrists. Oh, they’ve tied you up? Who knew that was coming? Or, how about a gun that can only be fired by your palm print? That definitely won’t end up in anyone else's hands at some point in the next 90 to 130 minutes.

Even an amateur can spot a clumsy Chekhov’s Gun and, used poorly, they can further ruin already bad films. The not-great Prometheus rather painfully labours the introduction of an automated surgical machine so badly you can almost hear director Ridley Scott behind you, hissing ‘they’re going to use it later to cut out an alien’.

Consider those your starter blocks on an easy way to ruin all films. It’s not always quite so blunt, though. Done well it’s unobtrusive: the horror film Hush stars a deaf woman stalked by a psychopath, and introduces the concept of a disorientingly loud door alarm meant to be felt through the floor fairly easily in the opening act, just so it can be used later to stun the attacker. It seems perfectly acceptable - she’s deaf, she’d have that sort of thing in the house - but, if you know what you're looking for, bells will start ringing other than those attached to the front door.

Jaws similarly introduces something important without feeling too forced. “Dammit, Martin! This is compressed air! If you fool around with it, it'll blow up!” shouts Hooper after an accident. That’s not glaringly obvious because compressed air does explode. It is dangerous, so of course you’d make a fuss about clanging tanks around the deck of a boat. Okay, the shark does end up with one detonating in his mouth later, but it doesn't feel so telegraphed as to spoil anything.

Shaun of the Dead actually subverts everything with a literal Chekhov's Gun - a winchester rifle hanging up on the wall of the pub that takes its name from it. Early on it’s very prominently discussed as to whether it’s real. Later we find out it is real and then used. The film doesn’t so much follow the rule as recreate it word for word. (There's a reason why it's the top image.)

However, if you want a masterclass in how to set up something you need later and not trip any alarms, then consider this little exchange from Ghostbusters:

Spengler: There's something very important I forgot to tell you.
Venkman: What?
Spengler: Don't cross the streams.
Venkman: Why?
Spengler: It would be bad.
Venkman: I'm fuzzy on the whole good/bad thing. What do you mean, "bad"
Spengler: Try to imagine all life as you know it stopping instantaneously and every molecule in your body exploding at the speed of light.
Stantz: Total protonic reversal.
Venkman: Right. That's bad. Okay. All right. Important safety tip. Thanks, Egon.

That whole scene is just there for a beautiful comedy moment between Spengler, Venkman and Stantz, right? It’s all about the timing and delivery: Harold Ramis’ droll calm, Dan Ackroyd's puppy dog enthusiasm in the face of painful atomic death, and Bill Murray's wonderful rubber faced deadpan. Oh, and it just happens to set up something crucial for the end of the film without really spoiling it.

Unless you’re in on the secret. Which you now are. Sorry. I did warn you.