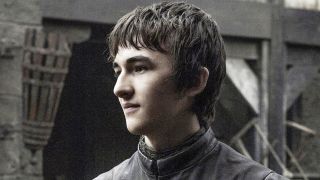 Everyone all caught up on Game of Thrones? We've all watched season 7, episode 4? Well if not, get on outta here! There's some big ol' SPOILERS AHEAD. Those of you who already saw the episode (or just don't mind knowing the plot), continue past this picture of a kitten adorably cosplaying as Daenerys.

The big reveal this week actually dates back to season 3, episode 6, when Littlefinger told Varys, "Chaos isn't a pit. Chaos is a ladder." It was a poetic way of saying that the discord and unrest in Westeros was not necessarily a bad thing for people like him, who would use the opportunity to climb upward in status and power. After all, it was Littlefinger himself who helped kick off the War of the Five Kings in the first place by betraying Ned Stark.

Flash forward to S7E4, and Littlefinger's meeting with Bran Stark. Littlefinger, accustomed to dealing with petty nobles and those who lust for power, presents a dagger of Valyrian steel as a gift. While using his silver tongue to convince Bran that he's there to protect the Stark family, Littlefinger mentions the chaos of the world. Bran interrupts him and says plainly, "Chaos is a ladder."

Littlefinger is caught off-guard, but there's more to it than just being surprised at Bran's boldness. By using that exact phrase, it seems that Bran is telling Littlefinger, "I know you are full of shit, I know what you did, and I know what you're up to."

By the end of the episode, Bran gives the dagger to his sister Arya. I wouldn't be surprised if our favorite face-stealing assassin thinks a certain someone's back would be a great place to put it.

Anyhoo, how 'bout that battle scene, huh? That was pretty intense - and here's how HBO did it. I wonder if any of those fan theories will pan out over the rest of the season...