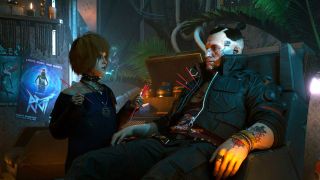 The rumour that CD Projekt Red is working on three more games within the Cyberpunk universe really isn't going away, but the developer has responded to the whispers. Well, kinda. A company representative spoke to Gamespot about the claims, although if you're expecting a straight-up confirmation or denial then you're out of luck, chum. The multiple game rumour hasn't been clarified either way, as instead CD Projekt Red has listed what its teams are currently working on.

To be specific, the studio has said that "we currently have a total of five teams working on a number of projects, with three focusing on the development of Cyberpunk 2077. These include CD Projekt Red Warsaw and Kraków, who are handling the main game, as well as the Wrocław studio, where around 40 industry specialists are engaged in technology R&D [research and development]. A separate, dedicated team at the Warsaw studio is handling the development of Gwent. The final team is Spokko, which is currently working on a yet unannounced mobile project."

So, there you have it. Three teams are working on Cyberpunk 2077, with one of them dedicated entirely to research and development for the RPG. There's no mention of multiplayer or anything else, although it's interesting that the studio still has at least one unannounced game to reveal - a mobile one. Whether that could be a companion game to Cyberpunk 2077 (a way to manage your character's exploits on the go perhaps?) or a new IP remains to be seen.

If you're still salivating for more games to play in the run-up to Cyberpunk 2077's release on April 16 2020, here's the best Amazon Prime Day game deals right here, or look below to watch our preview of Cyberpunk 2077!