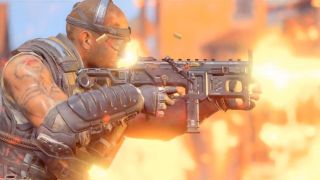 The rumors were true and this year we're going multiplayer only. Yes, that's right, there's no Call of Duty: Black Ops 4 single-player campaign. Or as Mark Lamia, chairman of developer Treyarch puts it, there is “no traditional campaign.” Whatever the reason (rumors suggest a Red Dead Redemption 2 dodging earlier release date meant the single player wouldn’t be ready in time for the October 12 Call of Duty: Black Ops 4 release date) it means this will be a remarkably different Call of Duty this time around, shifting its focus to multiplayer, Zombies mode, and a who’da thunk it Black Ops 4 battle royale mode.

That’s not to say there isn’t single player stuff, it’s just that what story stuff there is, is now happening through its multiplayer modes. “We’re doing things a little differently this year, including how we tell stories across all modes of play,” explains co-studio head Dan Bunting, adding, “we’re delivering more character and narrative depth in multiplayer than ever before.”

The bulk of that involves tutorial style challenges built around the game’s multiplayer Specialist characters. “We’re going to give players the ability to learn and master each of the specialists in a series of solo missions", says Bunting. “These missions will feature a series of fun and fast paced trials that give a hands on introductions to these new and returning specialists, while also exploring their stories inside of a narrative universe that takes place between Black Ops 2 and Black Ops 3.”

So, instead of a single cohesive single player campaign Black Ops 4 is aiming for multiple “skill-based” moments inside what the studio is calling a “narrative fiction wrapper.” As Bunting puts it, “there’s a story, but it’s being told inside of the multiplayer universe".

In addition, there will be three separate Black Ops 4 Zombie campaigns when Black Ops 4 launches this year. And for the first time these will include a bot mode that will let you play solo, with AI controlled teammates.

And that’s it for the Black Ops 4 single player. It’s going to be an interesting experiment, both in terms of public reaction and as a test for whether COD could work as a multiplayer only, more service like game. The success of things like Fortnite has to make publishers like Activision wonder if it can take a similar approach and this seems like a step in that direction.