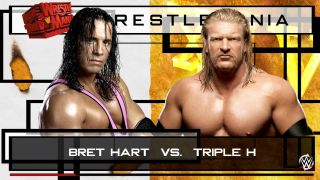 For my money, WWE 2K16 is the best wrestling game in years (I’ll sharpshooter anyone who mentions the words ‘No Mercy’ right now) – but one legendary veteran of the squared circle isn’t so keen on its round of virtual RKOs and ref bumps.

“I like it, but have some discrepancies,” he says in a new Bret Hart Radio podcast. “I went to a thing last fall when the latest 2K game was coming out. They were telling me how I’m an 85, or something like that, and Triple H is a 98. I remember I was like, ‘why would he be a 98?’ And they go, ‘well because he’s the boss and we have to suck up to the boss.’”

“I dunno, he was laughing about it,” continues Hart. “It kind of pissed me off though. I thought, ‘I don’t care how many titles Triple H wins. He could never lace my f***ing boots.’”

And that still isn’t the end of his, er, constructive feedback: “When I think of a video game I think of how I’d love to have Buddy Rogers against Ric Flair… where you can wrestle these legends from different periods against each other. They should always represent the reality of what the wrestling business is and was. It should also include the respect the wrestlers have for each other in the dressing room.”

Eye-popping stuff, with only one flaw: the Hitman’s numbers are off. At 2K16’s launch last year, he had an overall rating of 90, while Triple H had 91. So, one whole percentage point to split the pair.

I’ll bravely leave it to someone else to drop that particular bombshell on him.