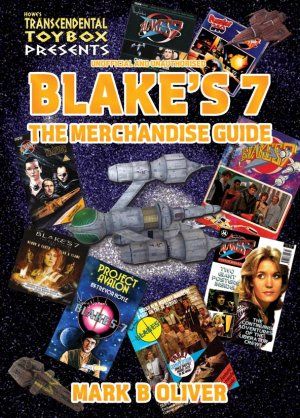 You might think that you’d struggle to wring a pamphlet out of the subject of Blake’s 7 merchandise, never mind a whole book. You’d have a point. Unlike its brick-thick, Doctor Who -focused forebear, Howe’s Transcendental Toybox , B7:TMG is a slim 190-page volume (which makes that £20 RRP a trifle eye-watering).

Even filling that number of pages appears to have been something of a stretch. So not only is there a complete breakdown of the contents of every issue of the official Blake’s 7 magazine, but there are run-downs of every album to feature the theme tune, and every issue of an SF mag ( SFX included - we made it, ma!) to run a feature on the show (admittedly, pretty handy should you wish to build up a library by eBay hunting). The book also concludes in 36 pages of interviews with the likes of B7 script editor Chris Boucher, novelist Tony Attwood and comic strip artist Ian Kennedy.

You have to admire the amount of er, scholarship that’s gone into the book, although at times the reading experience can be a tad sobering. As you plough through a 25-page guide to all those B7 VHS releases now clogging up landfills across the nation (every catalogue number scrupulously recorded), you may find yourself suffering a minor existential crisis. Millions of years of human evolution, for this ?

Of course, this isn’t meant to be a Nobel Prize contender. It’s a fannish reference work whose purpose is to quiet that nagging fanboy inner voice, the one that will only finally be silenced when everything in the known universe is safely tabulated in a spreadsheet. File it away on a shelf and you can sleep soundly in the knowledge that should you ever need to know the net sales for issue 21 of Blake’s 7 magazine, the answer is safely within reach. (It was 10,309)

There are some interesting titbits along the way. Mark Oliver has obviously dug into the BBC’s memos, unearthing facts about products that never made it into the shops, including a board game from Denys Fisher, lollies from Lyons Maid and transfer packs from Letraset. His completist approach leads to some amusing tangents: the section on books lists numerous Star Trek novels and the like which have made sly reference to Blake and co. Best of all is the utterly baffling existence of a series of unlicensed Argentinean Blake’s 7 products, including dominoes, a Ludo game, and sets of spinning tops (or “ trompos especiales ”, as the packaging thrillingly trumpets).

Sadly (although it's not the author's fault), the book is rather short on this sort of eye candy. Most Blake’s 7 tie-in tat arrived years after the series died a death, and while interview CDs and “garage kits” no doubt have their admirers, they don’t have the necessary kitsch value to raise a smile in the way that a Dalek dress-up set or a Leela dolly does. A “neutron space rifle” which fires ping pong balls (rarity rating: five Federation symbols out of five) is one of the few items likely to excite your inner eight-year-old. Start scouring those car boot sales now…

Read our review of Blake's 7: The Liberator Chronicles - Volume One .
Read more of our book reviews .