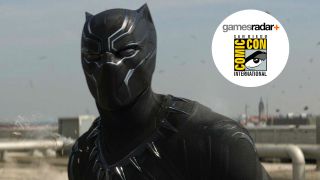 Since Black Panther made his debut in Captain America: Civil War, we've heard a lot of talk about potential cast mates joining him for his solo venture. None were officially confirmed until today, as we've now learned that he Force Awakens' Lupita N'yongo and Fantastic Four's Michael B. Jordan are definitely in the movie along with newest addition The Walking Dead's Danai Gurira.

Marvel's panel at San Diego Comic Con kicked off by introducing Black Panther director Ryan Coogler to the stage, and proceeded to bring out all of the main cast members. T'challa himself, Chadwick Boseman stood alongside his co-stars as each of their characters were revealed:

With casting in place for T'challa's solo outing Coogler went on to confirm that they'll start shooting the film in early January 2017. While we can expect to see set photos galore once we head on into next year, you can feast your eyes on the shiny new logo that hit the web today:

Directed by Ryan Coogler and starring Chadwick Boseman, Lupita Nyong'o, Michael B. Jordan and Danai Gurira, Black Panther is released in UK cinemas on February 9, 2018 before opening in US theatres on February 16, 2018.