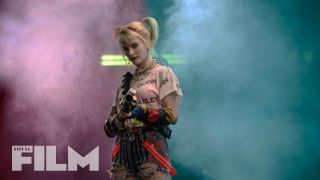 Bird of Prey (and the Fantabulous Emancipation of One Harley Quinn) is the first comic-book movie to arrive in 2020, and it’s also one of the most exciting. Because, as the extravagant subtitle makes clear, Margot Robbie’s Harley has been emancipated from her former beau, the Joker, and has broken away from the Suicide Squad. Now she’s forming her own “girl gang”…

“I feel like I’ve spent so long thinking about it, and working on it, that it’s going to be really nice to be able to put it out in the world,” producer and star Robbie tells our sister publication Total Film magazine for the new cover feature. Above and below, you can see exclusive new images from the upcoming DC movie, include a cool behind-the-scenes shot.

“Once I started getting to know her, and prepping for [Suicide Squad], I was like, ‘Oh my gosh, there is so much more to be done with this character,’”, continues Robbie. “Obviously, you can only do so much in a film like Suicide Squad where there are so many other characters, and you’ve got to be introduced to everyone, and you’ve got a huge plot thing to contend with. So I was just like, ‘There is so much more to do with her.’”

Robbie, Yan and the cast speak in detail about the movie with Total Film magazine for the latest issue’s cover feature. The new issue hits shelves on December 20. Birds of Prey opens in cinemas on February 7.