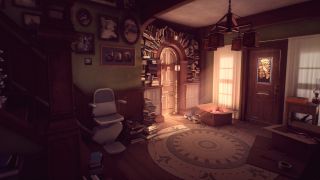 There's something uniquely satisfying about untangling a complex, provocative mystery, and thankfully there are plenty of games that offer that experience to the thinking gamer. Naturally, the best mystery games rely heavily on narrative, but they offer a range of gameplay experiences ranging from passive to action-packed.

Telltale's signature formula of pairing deeply thoughtful stories to consequential decision-making is perfectly suited to the mystery genre, and The Wolf Among Us is ample proof of concept. Here you're tasked with a fairly singular goal: solving a captivating murder case in a fairytale version of New York City, meanwhile keeping fairytale characters and their hidden community a secret from the outside world.

A prequel set in the world of the Fables comics, The Wolf Among might surprise you with its grittiness. This very noir murder mystery kicks off with a decapitated prostitute setting into motion the events of the game. Decision-making and the resulting consequences can be agonizing, as often-times it's nigh impossible to determine the outcomes of your choices. But The Wolf Among us manages to surprise at every turn, making it a worthwhile adventure no matter where your decisions take you.

Heavy Rain is what solidified Quantic Dreams founder David Cage as a pioneer of the narrative-driven, interactive game experience. What would follow from the director's vision ranges from forgettable (Beyond: Two Souls) to genre-defining (Detroit: Become Human), but the since-remastered Heavy Rain remains a must-play for fans of dramatic storytelling and mystery-solving.

In Heavy Rain, the stakes couldn't be higher for protagonist Ethan Mars, who had just lost a son before having another taken from him by the mysterious "Origami Killer." With a fast-moving clock on his son's life, Ethan is forced to endure exhausting, increasingly horrific "tests" to prove his fatherly determination. Heavy Rain feels very real - one of my playthroughs resulted in an ending about as wretched as I've seen in a game. Needless to say, I've played through Heavy Rain more than a few times, and you likely will too.

999 sticks you on a sinking ship with a literal ticking time bomb in your belly. Your quest to disarm the explosive and escape the ship is bloody, regretful, and utterly gripping. Its sequel, Virtue's Last Reward, is a time-bending escalation of "the Nonary Game" you're forced to play across each game's story. The Zero Escape series is complex, non-linear, and downright stressful, but the storytelling is practically unmatched in the mystery genre.

When you think of mysteries and detective stories specifically, there's almost no better setting than L.A. Noire's sepia-toned 1940s Los Angeles. A technical marvel for its time (2011), L.A. Noire still looks good today, but more importantly, it's also just as engrossing to investigate murders and climb the ranks of the L.A.P.D. Groundbreaking facial animations considered, L.A. Noire's greatest achievement is making you truly feel like an up-jumped cop in a moody film noir.

The 2017 remaster on PS4, Xbox One, and Nintendo Switch features updated textures and a few convenience updates that make L.A. Noire an essential crime-drama mystery for aspiring detectives. Though, it's best to forget the precedent set by Rockstar's mainstay series, Grand Theft Auto and Red Dead Redemption. While it's technically an open-world game, L.A. Noire tells a laser-focused story without a lot of room for distraction. And believe me, that's a good thing, because you'll be too absorbed in rooting out the scum of L.A.'s underbelly to care about anything else.

How could a list of the best mystery games exist without the man himself, the prolific Dr. Sherlock Holmes? Though, Sherlock Holmes: Crimes and Punishments earns its spot on this list without relying on the famous name of its titular detective. Like the best detective games, this one will have you second-guessing yourself, as well as everyone you interrogate, as you work through the complex moral bargaining at its center.

Exploring the detailed environments, picking out clues, and piecing together conclusions is surgical in a way you might expect from a Sherlock Holmes game, but Crimes and Punishments adds a challenging ethical question to your choices that elevates it beyond its piers. This is Sherlock Holmes with a conscious, and Crimes and Punishments is a detective game that more than lives up to its legend.

Her Story is an interactive movie. There is no "gameplay" in the traditional sense, and even the visuals are live-action shots of actual actors through an actual camera. Now that that's out of the way, the reason Her Story qualifies as a game is that it's up to you to sort through various clues and decipher their meaning.

Clues exist in the form of archived clips from a police interview with a woman whose husband has gone missing and is later found murdered. The character and her relationship with her husband are fascinating to learn about, each new revelation a source of multiple new theories about whether Hannah Smith is culpable for her husband's murder.

What Remains of Edith Finch

For a stylish, lighthearted mystery or distraction, look elsewhere. But if you're in a mood to reflect, empathize, and become entirely absorbed in a touching, often heart-wrenching dive into loss and mortality, don't sleep on What Remains of Edith Finch.

The story of a possible curse that leaves only one family member of each generation alive, is exactly that; a story. Some very light puzzling is all that hinders your pursuit of the mystery behind your relatives' deaths, and it'll only take a couple of hours for you to learn the truth of What Remains of Edith Finch. Like it or not, it'll probably take far longer for you escape its emotional grip.

While most mystery games are content with identifying the culprit in a small town crime, Outer Wilds seeks to solve mysteries on a much larger scale: the universe, or at least the solar system you're tasked with exploring and the infinite time loop in which it lives.

On its surface, Outer Wilds is a space exploration game about looking for clues and solving mysterious phenomena on diverse planets, but just beneath the crust lies an experience unlike anything I've ever played. Learning more about the extinct, intelligent species called Nomai compels your adventure, but the ways in which you uncover their secrets is what makes Outer Wilds so special, and I'd never forgive myself for spoiling anything.

Return of the Obra Dinn

Return of the Obra Dinn's story of a ship that returns to port five years after having gone missing, now a mass grave for its occupants, is enthralling throughout its fairly brief run-time. Your job as an insurance adjuster is to figure out what happened to the ship's crew and passengers, who all died mysteriously or went missing en route.

The distinct monochromatic art style and wistful score offer the perfect setting to wrack your brain for clues to the Obra Dinn's ill-fated voyage, and you'll want to use every tool in your cerebral shed to find whodunnit. Return of the Obra Dinn never holds your hand, which only makes piecing together its many secrets that much more rewarding.

The Vanishing of Ethan Carter

For those that like their mysteries with a side of horror, the gorgeous The Vanishing of Ethan Carter is not to be missed. I can confidently say it's one of the best-looking games I've ever seen, even six years after release. Still, it's the tragic events that reveal themselves in Red Creek Valley as you slowly unfold the mystery of 12-year-old Ethan Carter's disappearance that stay with you long after the ending.

That mystery stays central to The Vanishing of Ethan Carter from beginning to end, in terms of gameplay and narrative. There are no baddies to fight and nothing to run from; just a wonderfully melancholy atmosphere and some brilliant puzzling to occupy your time piecing together the arresting paranormal drama surrounding Ethan Carter's spell-binding riddle.