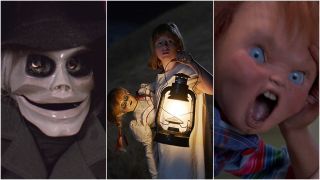 The best doll horror movies are the ones that we like to laugh about when we’re with friends but secretly would never watch alone. The sheer idea of evil lurking inside an innocent child’s plaything is enough to make us shudder at even the idea of glassy-eyed doll watching us sleep, let alone allowing one into bed with us. And yet the heroes of doll horror movies still look at the evil toy and go ‘Awwwww.’ They are the people, those twisted few, who will pass a charity shop and purchase the hand-me-down toys that look like they’ll remove your eyeballs the minute you reach dreamland.

The Annabelles, Chuckys, Billys and Brahms of the world somehow still continue to find homes and we just keep watching through our fingers. But which creepy doll movies actually work? With so many cheap clones lining the shelves, is it still possible to be afraid of the patter of tiny humanoid feet? The answer is, of course, yes. It’s time to turn off the lights and settle down next to that toy with the buttons for eyes that arrived inexplicably in the post this morning. Here are the best doll horror movies that mean you’ll never go to a toy shop again.

There are 12 Puppet Master movies. Yes, you’ve missed out on 12 gorefests centred around inanimate objects making gravy from human fleshy bits. It’s hard to pin down exactly which of these B-movies can be classed as ‘superior’ - 2018’s Puppet Master: The Littlest Reich is a grisly highlight - but it’s probably best to start where it all began in 1989.

After a puppet-maker takes his own life, a group of psychics arrive after seeing disturbing visions of death.

It doesn’t take long before these divinations start coming true as the haunted puppets Blade (that’s him with the hook for the hand), Tunneller, Pinhead, and the fondly named Leech Woman start picking the psychics off from floor height. It might be hokey as hell but surreal nightmare fuel lurks in this inventive franchise. Whether it’s the stark image of a bloodied hand reaching for life after someone is yanked under a bed, or a doll apparently choking up leeches to place on a mans chest, there’s true horror in this toybox.

Sure it’s a made for TV movie made of three short films, but the Trilogy of Terror’s final story is now an iconic piece of horror film making. The thirty minute short titled ‘Amelia’ is based on I Am Legend writer Richard Matheson’s story of the same name and follows a woman, played by Karen Black, who has bought her new boyfriend what’s known as a Zuni Fetish Doll. Sounds like it’s going to be fine, right?

After explaining to her mother on the phone that the doll comes with a warning on a scroll about removing its necklace, Amelia goes for a nice relaxing bath. Little does she know that the piece of jewellery has - you guessed it - dropped off the doll. What follows should be laughable, but watch alone and the sheer intensity of this murderous doll, along with Black’s excellent performance, makes for a perfect mini horror movie. Swinging a kitchen knife and pattering incessantly across the floor at ankle height, this little monster makes for a truly terrifying alternate Toy Story.

Switching out zombies for creepy dolls, The Walking Dead’s Lauren Cohan is the one woman star of The Boy. Moving from the USA to take on babysitting duties in an English manor house, Greta thinks she’s escaped horror, leaving behind a previous relationship. It turns out, though, that she’s not been tasked with looking after a child. With his blank porcelain gaze and well-pressed suit, Brahms definitely isn’t a real boy but apparently still requires all of the attention of a child. Hard. Nope.

Once the doll's ‘parents’ leave the premises, Greta decides that Brahms is just a coping mechanism for the couple’s real son who died in a fire at the age of eight. However, Greta pushes on and does the chores requested of her. While things are fine for a while, soon enough the glassy-eyed doll starts creepily moving around the house and Greta realises that agreeing to look after Brahms might not have been the smartest life decision. With a surprise sequel coming out later this year, the inventively named Brahms: The Boy 2 with Katie Holmes, the story clearly doesn’t end where we think it does.

Sure, they should have moved the bodies as well as the headstones but let’s talk about that clown, shall we? Years before Tim Curry’s Pennywise would seal coulrophobia as an epidemic for an entire generation, Poltergeist quietly scarred endless children who really shouldn’t have stayed up past their bedtime. And it only takes one sequence for this red-nosed monstrosity of a toy to fuel a million nightmares.

You remember it like yesterday, don’t you? Young Robbie waking up, seeing his doll perched, watching him sleep and then trying to throw a cover over those staring eyes but failing. Like a grown up, Robbie tries to go back to sleep anyway, only to wake up to find the chair now vacant… If you don’t remember, maybe it’s time to go back to find out exactly what happens next? A mere two minutes of celluloid is enough to make this one of the best doll horror movie moments of all time.

Luke Skywalker as a murder doll. Yes, 2019’s horror movies have taken a distinctly weird turn, but that’s a very good thing when it comes to the reboot of the Chucky franchise. Surprisingly, Child’s Play is a smart reimagining of the series, taking murderous voodoo serial killer Charles Lee Ray out of the mix and making the murderous tiny dungaree wearer an AI doll that connects to the internet. It's a very Black Mirror move that pays off dividends as the doll transforms from innocent robot to serial killer.

Mark Hamill is clearly having the time of his life as Chucky. Aubrey Plaza makes for a perfectly harangued young mother, and Gabriel Bateman as Chucky’s new best friend makes the first half a genuinely sweet 80s buddy movie. While this doesn’t reinvent the killer doll wheel, if you’re looking for a modern take on the genre, it doesn’t get more fun than this.

Whilst it may not seem it, we actually live in the best of all the dark timelines. Why? Because we exist in a world where horror mastermind James Wan directed a creepy ventriloquist doll movie. A whole six years before The Conjuring haunted cinemas, Wan, along with his Saw co-creator Leigh Whannel, crafted this schlocky guilty pleasure. And, make no mistake, it is a very guilty pleasure. There’s no subtlety here. Ryan Kwanten’s Jamie receives a Goosebumps Slappy-like dummy in the post. He then heads out to pick up Chinese food, and returns to find his wife dead and with her tongue ripped out.

Soon enough, he finds a note in the box the doll came in, authored by one Mary Shaw. Thus ensues a trip back to his hometown of Ravens Fair to discover more about Shaw, who ‘had no children, only dolls.’ It’s not exactly big on character development or, err, logic, but there’s plenty of proto-Conjuring fun to be had with some completely OTT stylistic decisions, and more ventriloquist’s dummies than any sane human should feel comfortable with. Yes, one is too many.

In 2019, no one ever really gets a chance to say the words ‘the second spin-off sequel’s a charm’ but here we are nonetheless. Unbeaten in scares by this years Annabelle Comes Home, Annabelle Creation, by Hollywood law, should have been terrible. Yet, this addition to the extended Conjuring universe is a veritable terrifying ghost train of a creepy dollfest.

Directed by David F. Sandberg, the filmmaker behind the spectacularly scary short film Light’s Out (and slightly less scary full movie version), this continues the story of the glassy-eyed Annabelle, showing us how she ended up finding her way into that locked glass cabinet in the Warren’s basement. It all ties in satisfyingly to the current lore, but Annabelle Creation’s greatest strength is knowing exactly how to get under your skin with an inventive checklist of unsettling scares and taking its sweet time torturing you with them. It’s fun, honest.

Long before the spin-off Seed of Chucky was a sparkle in a possessed doll’s eye, Child’s Play was a serious horror movie. Well, as serious as a film about a doll inhabited by the soul of a serial killer can be. Directed by Tom Holland from a story by Don Mancini, the original Child's Play is a darkly funny flick, but not the all out comedy fest of later movies in the series.

Look back to 1988 and there was not the same glut of doll horrors as there is now. There was still something truly disturbing as Karen Barclay thinking she was buying the best possible toy for her son’s birthday, only to later discover she had brought a murderer into the house.

while Chucky lost some of his insidiousness after the first movie, the death of Karen’s best friend - those little footprints on the work surface - and Karen's own desperation as she tries to pull batteries out that don’t exist are genuinely creepy sequences, not aged by time. Plus, the use of animatronics and the gradual humanisation of the doll itself make for chilling stuff. Wanna play?