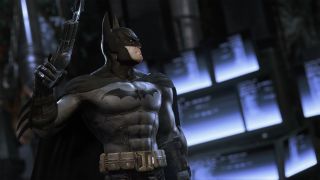 The bat signal is officially lit. After all those (pretty concrete looking) rumours last week, the Batman: Return To Arkham collection has been revealed by Warner Bros. It'll include Batman Arkham Asylum and Arkham City which have both been made shiny and new again for PS4 and Xbox One in Unreal Engine 4. Yep, that's just consoles for now. Given the problems of Arkham Knight on PC, there might not be too much  hope for a skip across to Steam.

The remasters have been worked on by Virtuos, the studio who recently ported Heavy Rain to current gen, and so far, as you can see from these screens, the Dark Knight looks very crisp indeed. Return To Arkham will include all Game Of The Year and DLC content and has upgraded models, environments and lighting so ready your screenshot folder. I can't wait to make my way through Arkham Asylum again and we don't have long to wait. The collection will release on July 29. Get excited by Rocksteady's masterpieces all over again with the below trailer.

GR+ news lead Louise is a fan of all things Bat and Assassin shaped. She can often be found watching horror, drinking coffee and beating you at The Binding Of Isaac: Rebirth.