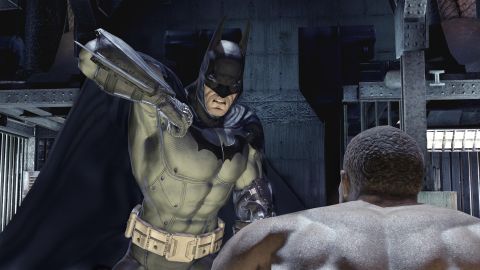 We’re frequently disappointed by games based on our favourite licenses because we and the people making them usually want very different things. We want to live the essence of our favourite movies, comics and heroes. We want to directly experience what we love about them and by doing so make them more real. Developers and publishers usually just want to use a recognisable brand name to sell a few extra copies of something, and it doesn’t really matter what that something is. Thus the strong, layered, nuanced worlds we love are squashed into convenient-to-make anygame templates and we usually end up with something like this:

You’ll have heard a lot so far about Batman: Arkham Asylum being the greatest superhero game ever made. But while the sentiment has now lost all meaning through its dogged repetition in the press over the last few months, it still needs addressing. Not only because it’s completely true, but also because Arkham Asylum gets the treatment of its subject matter so right that it’s now the new benchmark in games licensed from anything. Sorry, Goldeneye.

Intro for the Bat-fans

Fellow Chiroptera-geeks, your time has come. Recognising that Batman’s character, abilities, world and cast are already solid, diamond-encrusted gold in terms of drama, visuals and action, Rocksteady Studios has distilled everything that’s made Batman so mind-bustingly awesome over the last 70 years and created a true, legitimate, interactive showing for him. Games can now stand proudly alongside movies, comics and animation as having a “proper” Batman in their line-up.

More on the details of that as we get further into the review, but know for now that Arkham Asylum is all of the dark, grimy, brutal, twisted and utterly enthralling things that spring to mind whenever you think of Batman. The attention to detail and sheer love of all things Gotham will make even moderate Bat-fans tingle, and serious fans will positively vibrate with joy. As a small example, take a quick look at how seriously Rocksteady has taken the all-important matter of Batman’s iconic cape physics.

Intro for everyone else

But we must rapidly move on from this nerdy Bat-fap love-in (for a while, at least). Because while Batman: Arkham Asylum is indeed The Best Superhero Game Yet Made ™, that title actually does it a weighty disservice. Because rather than simply a staggering piece of fan-service, it’s also a completely legitimate and utterly brilliant video game in its own right.

Arkham takes starting points from several of gaming’s big hitters (Splinter Cell, Ninja Gaiden, GTA, Metroid, Condemned and even Prince of Persia on occasion) but by focusing them all through a shrewd bat-shaped lens makes them completely its own. Any hardcore player with an appreciation of a finely-crafted game will have a lot to love, regardless of whether or not they’re the sort of person who’ll get excited when Bane does this after he beats you:

The core game takes Batman on a heavily story-led journey through the eponymous hell-hole during a Joker-headed takeover; a journey requiring calculated stealth violence, smart exploration, the odd bit of detective work and plenty of good old fashioned beat-downs. The sprawling Arkham Island acts as an overworld hub of sorts, allowing progressive access to the asylum’s facilities and catacombs while leaving you completely free to re-explore old areas and discover new ones as your abilities and Bat-tech expand.

It’s a big, ambitious game made of many diverse elements, and that Rocksteady has realised its vision in such a cohesive, compulsive, immersive and shockingly fun way is a testament to the immense progress it's made since 2006’s good but flawed Urban Chaos: Riot Response.

And now, on to the details!

About the above Rapture reference

Believe it. With Batman: Arkham Asylum, Rocksteady has given us 2009’s BioShock. Obviously Batman isn’t going to be doing any shooting from a premier-person perspective, and you won't see Killer Croc turn up in an atmospheric diving suit, but surface trappings aside, the essence of what both games achieve is very similar indeed.

Arkham’s rusting Gothic nightmare is the closest we’ve experienced to a new Rapture since 2007. The density of atmosphere. The uniqueness of personality. The foreboding sense of tentatively trespassing on a long-established place much bigger and more dangerous than you… It’s all here in abundance thanks to some brilliantly detailed environmental design and a twisted sense of character in every area you’ll discover. Put simply, Arkham Asylum provides that same deeply immersive, compulsively explorable sense of horrible reality that we’ve been missing ever since Jack’s bathysphere finally broke the surface.

That creative flair is coupled with the best use of the Unreal engine since Gears of War 2. Characters and scenery alike feel so solid and tangible that you’ll want to lift them out of the screen (and then probably put them swiftly back, because a lot of them are quite horrifying). With such technical skill combined with such vivid production design, it’s no great stretch to say that in places Arkham is actually even more of a reward for the eyeballs than Epic’s shooter masterpiece. Seriously. It just is.

Cutting through to the basic mechanics of the game, the meat of what you’ll be doing will involve either stealthily dismantling rooms full of increasingly freaked-out goons or beating a path straight through them, depending on how well-armed they happen to be. Batsuit armour might be Waynetech approved, but seven guys with machine guns can still manufacture a dead bat pretty quickly.

Should you choose to take the direct approach, you’ll be presented with a very rewarding combat system indeed; one which is as accessible as you could want while holding seriously satisfying depths. You have one button for attacking, one for counters, one to stun enemies with a swish of a cape, and another to control all the acrobatic flipping and evasion you’ll need when taking on Arkham single-handed. Little lightning symbols briefly appear over the head of any goon preparing to take a swing, and if you tap the counter button quickly enough, Batman will parry or reverse the hit with effortless brutality. And without breaking his flow for a single frame.

Here's where we would usually bang on about how the context-sensitive animation is so slick that you could almost mistake it for FMV at a cursory glance, or the fact that when you're seamlessly pounding, parrying, dodging and leg-breaking your way through the centre of a 10-man mob, it could not look or feel more Batman. But we'll let you watch it for yourself, with explanations from Director Sefton Hill.

But we will tell you that there's a mammoth level of satisfaction to be had by plumbing the depths of Arkham's combat mechanics. There’s a savage efficiency to the whole process, and when it all comes together successfully, even a zen-like flow that kicks in as you start chaining up monster combos.

And it requires seat-of-the-pants tactical thinking too. Do you keep moving to stay one step ahead, or linger around to herd all the goons together for an ultra-fast hit string? Do you keep your distance, or do you focus the fight around a weapon storage cupboard, guarding the guns inside from their would-be users? Should the hulking great uber-goons be prioritised, or should you keep them around for a while to smack up the normal ones with their lumbering clumsiness? Fast, brutal and intelligent. It’s Batman down to the ground.

Similarly, stealth play is an absolute joy. Rightly refusing to turn Batman into a cowering little girl, Rocksteady has built the sneak-battery around systematic domination rather than hiding and hoping for the best. No cardboard boxes here. Oh no. It’s all about silently surveying your prey from the rafters and picking them off one by one, until the final, terrified goon is yours to toy with.

And “toy” is certainly the word. Your ever-expanding set of gadgets (tools are added and upgraded as you gain XP throughout the game) let you pull apart the opposition using any approach you can come up with. You can drop a straggler with a well-timed swooping kick from the roof before grappling back up unseen. You can use batarangs fitted with sonic emitters to draw your quarry beaneath you, before dropping like a silent bomb and pulling him up into the darkness, and dangling him as bait for the rest.

If you fancy being even more methodical, you can explore the crawl-spaces around the room, setting up “out of nowhere” beat-downs or laying explosive traps in walls and floors. And for those moments when you’re feeling uber-pro, there’s always the good old fashioned, sneak-up-behind-and-throttle-them-while-they’re-distracted approach.

The game strikes an excellent balance with all of this stuff. At no point will you ever feel any less than a ludicrously-empowered dark wraith of justice, but your abilities are rationed out and restricted by the environment well enough that stealth will never become a walkover. You’ll have to earn every single victory you win, but the ways in which you can earn them means that even the toughest will never be a chore.

But for all of this clinical breakdown of core gameplay elements, Batman: Arkham Asylum is much more than the sum of them. And that’s another key trait it shares with BioShock. Whether stealth-whupping goons, beating their faces to pate, tracking a DNA trail with your all-seeing Detective visor or navigating some PoP-style platform puzzling, everything is bound together with razor sharp pacing and a fantastically cohesive sense of place.

Even to seasoned, long-serving journos like ourselves, playing Arkham Asylum feels like being part of a compulsive, organic story within a very real world rather than negotiating a series of levels and gameplay mechanics. That’s aided no end by a general avoidance of traditional boss fights in favour of story-led climaxes and some thrilling set-piece areas. We’d have to take very long, hard looks at our lives if we spoiled any of those for you, but have no doubt of our word. There are some truly amazing ideas in Arkham Asylum that you will not see coming. One in particular is a masterclass in building tension which rivals even the battle with Salazar’s Right Hand in Resident Evil 4. And another… No, we’re saying nothing. Trust us, you’ll prefer it if we don’t.

It is then a shame that Arkham makes a slight concession to typically gamey trappings right near the end, with a couple of very traditional boss battles that stick out like a pocketed batarang compared to the rest of the game. It's not that they’re especially bad; in fact they’re no worse than many bosses in Resident Evil 5. But after so many hours of clever, fresh design and brilliantly-paced flowing narrative, it’s disappointing that such clunky game design throwbacks are there at all. Not all BioShock parallels are good ones, it seems.

But they’re nowhere near enough to taint your overall experience with the game. Because in Batman: Arkham Asylum, we really are talking about one of the very best of this year. Get it. Get it as soon as you possibly can.