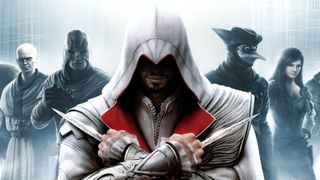 A promotional image for Assassin's Creed: The Ezio Collection has popped up on French games site Gameblog (which, despite the orange plus sign, naming scheme, and similar font styling, have no relation to us here at GamesRadar), adding more fuel to a fire that Ubisoft refuses to acknowledge is burning.

The leak calls to mind other games recently given away by marketing materials. Batman: Return to Arkham showed up in an industry magazine before it was announced, and Battlefield 1 had a bit of its reveal thunder stolen by images popping up on Xbox One dashboards and retailer posters.

Despite a looming release date, a ratings board certification, and now the alleged leak of promotional materials, Ubisoft has yet to officially confirm The Ezio Collection exists. I guess this is what it feels like to be an NPC Templar guard, knowing an Assassin is lurking somewhere out there, but not certain of where and when he'll strike. Oh well, I'm sure it's nothing. Back to my usual patrol route!