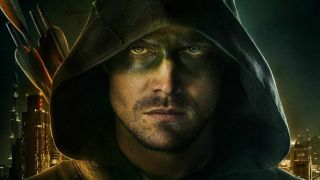 Arrow – the series that helped launch a half dozen DC shows on The CW – has come to an end. The ending nicely rounded off most of our beloved characters' stories, but left one intriguingly open-ended – potentially even teasing a spin-off series.

But first... Spoiler warning! This article contains major spoilers for the Arrow finale. If you have yet to watch the Arrow episode "Fadeout" then turn back now.

So, what happened? Oliver Queen was given a fitting send-off from his friends and family. David Ramsey’s Diggy gave an emotional eulogy to his former friend – but then something else happened to the former bodyguard.

Packing everything up to move his family to Metropolis, Diggle sees something crash down to earth. Inspecting the item, he finds a box containing... well, it's not revealed what Diggle sees, but it does glow green...

For some time now, fans have been speculating that Diggle could be a future Green Lantern, with as much being teased in the "Elseworlds" crossover event back in 2018 when the Flash of Earth-90 remarked to Diggle: "Hello, John... You are not wearing your ring." Now, Diggle seems destined to take up the green ring and become the Green Lantern.

Speaking during a post-screening Q&A (via Entertainment Weekly), showrunner/executive producer Beth Schwartz and consulting producer Marc Guggenheim discussed what the tease could mean for the future.

"This was something that was worked out over a year ahead with DC Entertainment," Guggenheim said. "We very specifically negotiated and discussed the parameters, and I feel like to say anything beyond what we have shown you would violate our agreement with DC."

So, in short, whatever The CW and DC Entertainment's plans for Green Lantern, we're not likely to find out until something official is announced. In the meantime, we have The Flash, Supergirl, Legends of Tomorrow, Black Lightning, Batwoman, and Superman & Lois to be getting on with.

Looking for something new to watch? Then check out all the new TV shows coming your way in 2020.