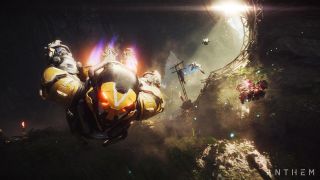 Regardless of your feelings on Anthem - which has been suffering from exploit-friendly bugs and and a mathematically broken loot system - you have to admit that flying around in your Javelin is joyous. Soaring through the air above the ruins (and dangers) of Bastion is incredibly freeing - with the only hard stop to full-on Iron Man mobility being the invisible flight ceiling that pushes you back down if you try to ascend too high. And though it might feel like your Javelin's wings have been clipped whenever you hit this roof of downward air currents, it's actually meant to increase your enjoyment of the flying overall.

In a GDC 2019 talk titled "Rocket Man: Creating Flight for Anthem," BioWare's Daniel Nordlander (senior gameplay designer, BioWare Edmonton) and David Hoang (senior animator, BioWare Austin) delved into the design decisions behind Anthem's airbound movement. Though much of the talk focused on the extremely complex work that went into animating unique flight motions for each Javelin type, the topic of the flight ceiling came up during the Q&A segment. If Gravity Rush 2 allows the player to float miles into the air (by reversing gravity) without any drawbacks to the gameplay, why can't Anthem's Javelins let you soar skyward without limits?

"We actually did experiment quite a lot," said Nordlander, citing Gravity Rush as an inspiration during design. "It's a really good game, by the way - I really like it. What they do is they tend to hide [the ground] with visuals effects or things like that, which blocks out the world when it's really far below you. We tried some approaches [like that], but the main concern there was still that you didn't really have to fly through the world - you could just fly above it."

Admittedly, Anthem's explorable world is largely a network of canyons, jungles, and ruins that encourage you to pull off some impressive aerial maneuvers and thread the needle to narrowly avoid slamming walls. If you could just cruise over everything in the stratosphere, your Javelin's boosters would probably feel more like a boring plane ride than a thrilling display of nimble aviation. "At that point, you could just head off into the distance and just sit there and not have to interact, or do anything with it," said Nordlander. "I think as soon as we lowered the ceiling a bit, and you actually had to fly through the world, we found that players were way more engaged by it - so that's why we opted for that."

The talk also quickly addressed the fact that freefalling is somehow faster than flying towards the ground, as players and sites like Kotaku quickly discovered. "We tried adjusting the fall speed to be slower to compensate, but it kind of made it feel like you're flying through syrup," said Nordlander. "So it's definitely weird physics behavior that falling is faster than flying down - but as it didn't really cause any actual exploits or issues in the game, we actually ended up shipping with this behavior."

To level up your Javelin fast when you're not flying around for the heck of it, try out some of our Anthem tips.