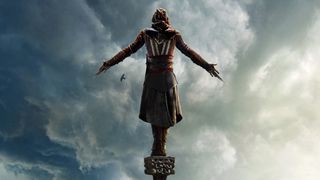 If you've ever thought that no one could perform real life Assassin stunts, prepare to watch TV through your fingers. Movie stunt man Dave Grant will be diving 100 feet during a live ad for the Assassin's Creed movie on Channel 4 on Sunday 18. The action will all take place at 9.10pm GMT during an ad break from Humans without a single wire in sight. Hopefully he'll have more to land in than just a haycart.

I actually watched other movie stuntman Damien Walters perform a 120ft freefall on the set of the Assassin's Creed movieand it was nail biting to see. That was in the middle of the day in Almeria in Spain but Grant will be diving outside a derelict flour mill in London at night. No pressure, Dave. After the jump we'll get an exclusive look at some footage from the movie. Check out Walters jump below or you can read a full interview about his Assassin's Creed movie leap of faith.