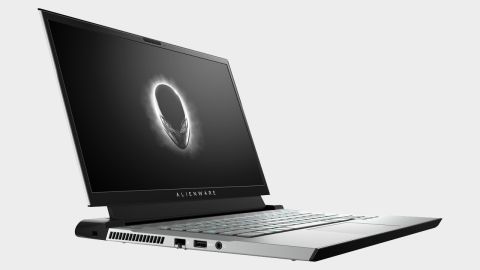 A gaming laptop that epitomizes quality in build, design, style, specs, and performance - though it comes at a (literally) high price.

Sometimes eyebrows are raised when Alienware gaming laptops are brought into a discussion about gaming machines - particularly when the subject of price comes up. However, they still represent a quality way of having and enjoying a powerful, portable gaming machine that'll serve you well both now and in the future. The latest of Alienware's laptops have had a significant redesign, and a whole new aesthetic covers the portable and in-situ machines. But are they as good as the specs indicate, and do they offer value for money? We looked at the new Alienware m15 R2 model to find out.

Just the simple act of pulling the laptop out of the (well-designed) box is a treat to start off with. Simply put, the design is exquisite. I had an Alienware laptop back in the late 2000s - which was cool and modern in its own right then - but this new design and aesthetic (called 'Legend') is a thing of genuine beauty. Aesthetically speaking, it's one of the finest pieces of gaming tech we've seen, and probably the best laptop design overall. The stylish white or black casing features a subtle '15' motif on the screen's front, on which the iconic Alienware head symbol also perches. With bezels of only 5.6mm, the screen itself sits incredibly nicely in the laptop's body.  Perhaps the most eye-catching thing is the excellent LED oval shape on the back. It's incredibly cool in more than one way - it's an unusual aesthetic so is a visually distinguishing feature, but it also houses the large exhausts for the laptop that help to keep the machine, well, cool. Inside, the keyboard is nicely inset into the body too, making for a very user friendly experience, and the LED backlighting only serves to heighten the stylish aesthetic. This can be customised through Alienware's new and improved Control Center which is easy to navigate and pretty intuitive when you want to change things up or match your machine to your wider aesthetic.

Everything feels solid and structurally sound, too - even the screen doesn't wobble or bounce that much when moved or its angle is altered. And it all comes in a lightweight package as well with the m15 weighing in at just 4.75lbs / 2.15kgs, give or take a handful either way.

Within the excellent and, I'll say it, sexy design are the makings of a truly wonderful gaming laptop, both in terms of component composition and usability. Immediately noticeable is the excellent 15.6-inch 4K OLED screen (in our review model, that is). It's a thing of beauty. In fact, it never ceases to amaze me how much a screen like this can elevate a gaming laptop overall. It's gorgeous, offering premium gaming monitor-level visual fidelity, crispness, and vividness to a portable machine. Even though it does only have a low refresh rate of 60Hz, that is tempered by a very speedy 1ms response speed. Of course, there are other, quicker screen types available within the m15 range so you 'll be well catered for if you'd prefer something nippier.

The guts of the machine are subject to one's personal tastes, desires and budget, of course - there are plenty of different options. However, the one we tested for review sat in the sweet spot when it comes to more affordable high-end components: an RTX 2070 GPU (Max-Q design); an i7-9750H CPU; 16GB RAM; and a 512GB SSD. Solid and immediately recognisable as a capable gaming laptop.

What's more, you're well covered in terms of the ports available to you. Present and easily accessible are: three USB 3.1 Type-As; one HDMI 2.0b; one Mini-Display Port 1.4; one Thunderbolt 3 Port; an Alienware Graphics Amplifier port; an ethernet port; and the usual audio jack input (compatible with inline mic headsets).

How does the Alienware m15 fare on some industry tests? I've included some 4K numbers just as a reference point for when using the laptop's beastly display at its full resolution.

To start off with a general comment, if I may: using the laptop, regardless of task, is a joy. It'll handle whatever you throw at it and from everyday tasks to chewing through games, making the m15 is something you can have total confidence in and enjoyment of.

Specifically - and in support of the benchmarks we ran - playing The Division 2 and Metro Exodus are particular highlights. The excellent and vivid screen really draws you in as the player, and while it's only the 15.6-inch version, feels very immersive. There were no blips or faults in terms of smoothness of gameplay, though you will have to take a few minutes optimising each game's graphics setting for the particular composition of the laptop. Overall, though, when one of these games is running on the m15, they really run well. Smashing stuff.

In addition, the screen is one of the finest I've reviewed. The OLED panel is crisp, bright, and all the other adjectives one usually uses to describe one of the best gaming monitors. Although the 4K resolution is not one you'll have running as standard in most games, the OLED makeup of the panel makes any resolution even better. The reality is that the guts of the machine won't be able to steadily run in the 4K resolution (though that's not a limitation of this particular laptop; it's to be found everywhere).

Although you're likely to team the m15 laptop with one of the best gaming keyboards and a contender for best gaming mouse, the built in touchpad and keyboard are pretty good nonetheless. The keyboard in particular is very satisfying to use, with each press of a key feeling, and sounding, pleasing. The touchpad is easy to use as far as touchpads go, with each command being instantly recognised. The satisfaction of using them only serves to up the m15's attraction as a laptop for work or other everyday uses as well - it's nice to interact with all round. The fans do make a bit of noise (it is a gaming laptop after all, and there's no truer sound of one than the intense blowing of fans) but it's nowhere near the loudest I've tested either. Plug in a quality PC headset for gaming and this won't be an issue at all.

Battery life? It's not fantastic, but I'm increasingly less inclined to put any stock in it, particularly from a gaming perspective. The portability one pays for in gaming laptops is the ability to go anywhere and replug it in, not really the ability to game on the go relying purely on battery.

In slightly more than a word, if you can afford it - the one we had cost $3,250 / £2,500, then you should absolutely consider the Alienware m15 gaming laptop. It is what we have come to expect from Alienware and the new design sees a real culmination of the gaming firm's excellence in design, style, and power. It's one of the best gaming laptops going, albeit with a price tag to match. However, there's definitely sense in going for one of these machines; if you need the portability, would prefer a warranty to accompany a new machine, and want to get one of the best laptops from one of the best makers, then the Alienware m15 could well be for you.

A gaming laptop that epitomizes quality in build, design, style, specs, and performance - though it comes at a (literally) high price.