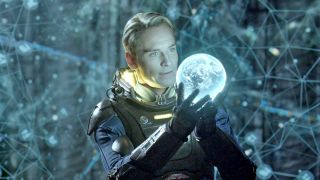 It's been well-established by now that Alien: Covenant won't skimp on the horror and gore of previous movies in the franchise. Yes, it's a sequel to Prometheus but it's also part of the Alien canon proper. We're getting xenomorphs galore in an R-rated movie that plans to bring a new cast of characters into a horrific situation.

New, that is, except for a couple of returning faces. Noomi Rapace's Elizabeth Shaw is back along with Michael Fassbender's android David. It was during a recent interview with Collider that Fassbender spoke about the sequel's goals to make you really, really scared of air ducts again.

“This Alien is going to be… I’m very excited to see it and everybody in the film was saying this is a film that we all want to see. It’s much scarier than Prometheus but it’s got the same sort of scope of Prometheus. It’s kind of got more of the sort of thriller, imminent disaster feel that Alien had, so it’s kind of a beautiful meeting of both of those films."

"I’m really excited to see it," he adds. "I think it’s gonna be super scary number one and then again with the massive scope of Prometheus… Once it starts and the ball starts rolling, it doesn’t let up. It’s really gonna bring chills to the cinema.”

Fassbender's co-star Danny McBride, who appears as the Covenant ship's pilot, chimed in with a very similar sentiment recently. He since revealed a first look at his character's domain on Instagram, posting an image of himself upside down in the cockpit with the caption: "Ridley's going to scare the shit out of you." Check it out: