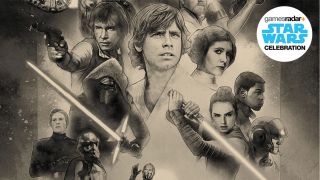 Star Wars Celebration 2017 is upon us once again. From April 13 to 16, Orlando is going to be a sea of lightsaber wielding cosplayers. This particular Celebration comes at an unusual moment for the galaxy far, far away. Excitement abounds but there’s also sadness. The very first Star Wars: The Last Jedi trailer is expected to be released - giving us our first glimpse of Rey’s tutelage under an older Luke Skywalker - but this SWC also comes just months after Carrie Fisher unexpectedly passed away. A source of grief for fans but also uncertainty about the future of the series, how will The Last Jedi director and Star Wars 9 writer Rian Johnson address the loss of a main cast member?

There’s more to look forward to beyond the core films, though. Star Wars Battlefront 2, more Marvel Comics like the new Doctor Aphra series, and possibly even a look at the new Han Solo movie may also be on hand. Here’s what we’re hoping to see at the event, and to find out all the Star Wars news that drops during Celebration, make sure you keep it on GamesRadar+.

It’s time. The first Star Wars: The Last Jedi teaser trailer is close. So close that some people claim to have already seen it and are leaking spoilers across the land. With Star Wars 8 director Rian Johnson hosting a panel specifically for the movie, it’s all but guaranteed we’ll see the trailer at the event. Finally, we’ll get that longed-for return of everyone’s favorite character to the series: Boss Nass. Right? Probably. Maybe not. Given that Disney and Lucasfilm have debuted all major trailers for new Star Wars movies on YouTube, you shouldn’t worry about seeing it if you've not got tickets, but we’ll be at the event covering everything so if any additional footage is shown we’ll be on hand to bring it to you.

When Carrie Fisher died at the end of 2016, her loss came with a question: would Disney go so far as to digitally insert her into upcoming films? After all, fully computer generated versions of the long deceased Peter Cushing and a young Carrie Fisher appeared as Grand Moff Tarkin and Princess Leia in Star Wars: Rogue One just weeks before Fisher’s death. Thankfully, the studio assured people in January that it would not pursue using a CGI Fisher for Star Wars movies in production. With that out of the way, all that remains is to send her off in style. It’s very likely that Lucasfilm head Kathleen Kennedy and Rian Johnson will pay tribute to Fisher at The Last Jedi panel at the event.

Confirmation on how Carrie Fisher's passing will effect the upcoming movies

Fans will also be hoping to find out how the upcoming Star Wars episode movies will be effected by the loss of Fisher. Principal photography for Star Wars 8 was finished well before she passed away, but with the movie still in post-production it could be altered to accommodate necessary story changes. Star Wars 9 reportedly has two crucial scenes starring Fisher in its current script, and it's just recently been confirmed that Leia will appear in Episode 9 using previously unused footage, but that doesn't mean that her role hasn't had to be adjusted. Star Wars Celebration is the perfect time to reassure fans that the movies won't suffer for the loss of such an iconic cast member.

The second of the Star Wars anthology spin-off movies (after Rogue One) is a young Han Solo movie and it's already in production. We've had little more than a few character names and a cast photo so far, so we're hoping that Star Wars Celebration will drop some more details. Sadly, there's no panel just for the Han Solo movie (it's far too soon) but that won't stop Disney from releasing a few juicy details, most notably, the movie's official name. Well, we can't very well keep calling it 'the Han Solo movie' and it's working title; Red Cups, doesn't sound much better. Fingers crossed we'll have confirmation of the Star Wars: Han Solo title before the end of SWC (or, you know, something more exciting).

The subject of the third anthology spin-off movie

Talking of the anthology movies, we're also hoping to have some word on who (or what) will be the focus of the third spin-off. Coming in 2020 we literally know nothing about it, but that hasn't stopped fans from speculating. The favourite at the moment is that it will be an Obi-Wan Kenobi movie and I have to say, that sounds good to me. Ewan McGregor's Obi-Wan was the saving grace of the Star Wars prequels and he's already said he'd be more than happy to return to the character. Plus, there's still a lot of unexplored years in Obi-Wan's life between the end of the prequels and the beginning of A New Hope. What was he doing all that time? We want to know! Other contenders include an unlikely but long-rumored Yoda movie, and the previously planned Boba Fett movie, which was cancelled at the last minute. Either way, we're hoping to find out at SWC.

Details on the OTHER Star Wars movies

The new crop of Star Wars movies will not end in 2020. Indeed, Disney is planning to make a Marvel-esque tide of spin-offs well into the next decade as our guide to every upcoming Star Wars movie explains. "We have movies in development for Star Wars until then, and we started talking about what we’re going to do in 2021 and beyond," said Disney’s Bob Iger in September 2016. This is all very exciting but after a whole new movie trilogy and three spin-offs, what could possibly be next? Hopefully we'll find out at Star Wars Celebration. All we need is a few hints. Come on Disney, give us something!

Speaking of merchandise, Star Wars Celebration 2017 only needs one Star Wars knickknack announcement: a freaking action figure of old man Luke Skywalker. Of the dozens of Rogue One and The Force Awakens figures Kenner’s released over the past two years, with about fifty variants of Kylo Ren alone, we still don’t have one of crazy Led Zeppelin cosplay Luke. At least not one that doesn’t cost a ghastly sum of money. No one is dropping $230 on this doll, Lucasfilm. Help out the children and adults with desks in dire need of decoration.