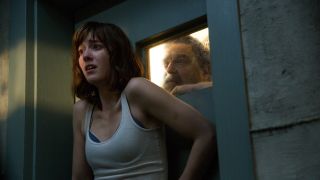 Since unleashing The Cloverfield Paradox onto Netflix during the 2018 Super Bowl (a very Beyoncé move), the producers of the Cloververse series have been remarkably quiet on potential sequels and spin-offs.

Overlord, the Second World War themed zombie horror movie released last year, was expected to be a Cloverfield film, but was actually just a regular, non-franchise film produced by JJ Abrams. Elsewhere, there's been some speculation that Kolma - a remake of 2003 Israeli TV movie Kol Ma (All I’ve Got) starring Daisy Ridley - could be a Cloververse film, but that has not been confirmed.

Perhaps, then, 10 Cloverfield Lane director Dan Trachtenberg can offer us an update on the cinematic universe?

“I know nuttin'," the filmmaker told Gameradar's Connor Sheridan in an exclusive interview.

10 Cloverfield Lane, which centred on a young woman (Mary Elizabeth Winstead) who is trapped in a underground bunker by a twisted man (John Goodman) during an alien invasion, seems ripe for a sequel. Questioned on whether he would return to the franchise, Trachtenberg was more forthcoming.

"The answer to making a sequel to that movie or another thing, yeah totally," he said. "It's fun to joke around, like, 'What if in the next one this happened?' Over the years there's been several that were, 'Oh, that'd be cool!' But nothing that's crystallised into, 'Oh, we definitely want to do that.' And JJ [Abrams] of course has to wrap his brain around what he wants to do with that stuff.“

Trachtenberg added that, while it would be "awesome to not do a sequel", if he could approach the story in a "radically different way" then he could be seduced into making a direct 10 Cloverfield Lane follow-up.

"I think that there's certainly fun ideas of how to do stuff that isn't literally just the next moment of that girl's life," he said. "That there's actually like, 'Oh, what if it was this crazy thing?' I think that stuff is really cool to think about. But not sure it is the best course of action.”

Trachtenberg likely will no have much time to work on another Cloverfield film anytime soon. The filmmaker is currently developing a cinematic adaptation of Uncharted, starring Tom Holland as Nathan Drake.

Not into the Cloverfield universe? Why not check out our picks of the best movies on Netflix?