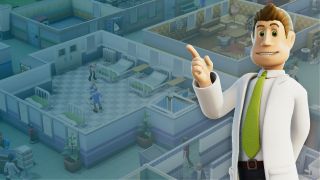 If you've had the pleasure of dabbling with Two Point Hospital on PC, then you'll know that this healthcare simulator is one that will stick with you for months to come. And now, sometime in late 2019, it's coming to PS4, Xbox One, and Nintendo Switch. Two Point Hospital presents a universe of bizarre illnesses and British slapstick humour, and it's a much-needed prescription for a lot of hours lost to your sofa – and that's speaking as someone that has already clocked some 50-odd hours in the game on PC already, and will totally be playing all over again on Switch later this year.

The console version hasn't been given a firm date just yet, but you should feel safe in the knowledge that it's coming, it looks fantastic, and will include all of the updates from the PC version to date and the two DLC expansions for free as a special console bonus. That's 21 hospitals to build and maintain and 119 illnesses to treat (and generally giggle at) all for one convenient price of entry.

Before you start panicking about the game's viability on consoles though, I have already had the pleasure of getting my hands on both the PS4 and Nintendo Switch versions of the game down at Two Point Studios itself. And oh boy have the team absolutely nailed the console command conversions. Handily, the UI itself has remained mainly the same between the PC and console versions, so for anyone making the transition, it'll feel quite seamless.

But it's the ingenious allocation of menus to specific face buttons that'll have you zooming through the UI with ease, laying out rooms faster than you can on PC. The majority of your building, hiring and firing menus are assigned to your Square button (Y on Switch), with moving between the various menus mapped to L1 and R1 (L and R on Switch). Because all of the building elements are locked to a grid-based structure, it's easy to pick up and place items without the use of a mouse. Two Point Studios has done an incredible job here, in ensuring that the control scheme is as easy to pick up as it is intuitive to use.

It's a terminal obsession

There are some nice new additions coming to the console version too, including some new visual cues to help make navigating the hospital and menus easier. When you're building a new room for example, you're given a checklist at the top of the UI to work through, and all it takes is a simple hit of triangle (X on Switch) to place a room and get it up and running. This makes it quick and simple to see what you need to place at a glance, which is handy revision for the minimised console UI. Of course, you can add more items if you want – I'm partial to a plant or two, for example – but as long as you hit that critical criteria you're good to go.

There is still a cursor if you want to use it though, and it comes in especially handy for browsing through the different skills of potential employees. It also loiters in the middle of the screen, allowing you to select individual items, or workers, within the world. It's surprisingly unobtrusive, and just relies on your manoeuvring the camera to wherever, or whatever, you want to highlight.

Otherwise though, it's the same brilliant Two Point Hospital. In our original review we praised it for being a cure for boredom and sadness, and the fact it takes the "the funny bones and beating hearts of Theme Hospital and transplants them into an entirely new mini-universe of glee and medical mischief." That's all still there in the console version, and it'll keep you tapping away trying to cure its various illness for days to come. Whether it's Lightheadedness where patients are wandering around with lightbulbs instead of heads, or Emperor's Complex that will have patients convinced they're clothed, when actually they're strutting around in their birthday suits, every little animation, cure and activity is worth paying attention to in Two Point Hospital. There's always something going on.

It's amazing to see Two Point Hospital arrive on consoles in such an impressive fashion. It's a brilliant game, and this will really open it up to a new audience. I'm so relieved that the console controls translate so well. Seriously, if you haven't played Two Point Hospital before now, please do.

For now though, why not check out our pick of the best Nintendo Switch games you can play?