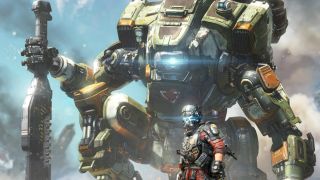 For those of you hoping to get to fight alongside one of 2016’s best videogame characters, the Titan BT-7274 from Titanfall 2, I have bad news: Respawn has pushed back any Titanfall-shaped plans to spend more time working on Apex Legends. As the game takes place in the same universe, the delay is probably down to the fact that the team that has all the Titanfall expertise is currently fully focused on Apex Legends, Respawn’s incredibly successful battle royale.

The news comes from Executive producer Drew McCoy, who revealed the information on a blog post about Apex Legends season 2, saying that “in order to fully support Apex Legends, we are pushing out plans for future Titanfall games.” Considering that 50 million people played Apex Legends within its first month, it’s disappointing but not surprising that Respawn are focusing on keeping Apex Legends full of sparkling potential. McCoy goes on to clarify that “no resources from the Apex Legends team are being shifted to other titles in development here at the studio, nor are we pulling resources from the team working on Star Wars Jedi: Fallen Order.” You heard him: Apex Legends is a top priority for Respawn.

If you’re reading this as an Apex Legends fan, I have good news! In the blog post there’s some extra details about what you can expect for the second season of Apex Legends, with McCoy teasing that “at EA PLAY in June, we will give you the first details on what you can expect from Season 2. We’ve seen all the feedback on Season 1 and look forward to showing you the improvements we’re making. For Season 2 you can expect a Battle Pass with more meaningful content, the introduction of a new Legend, the debut of a new weapon . . . and you didn’t expect Kings Canyon to stay the same forever, did you?”. Tantalising…

For those of you who live to be a champion, here’s the best Apex Legends weapons in the game, or look below to see them in action!