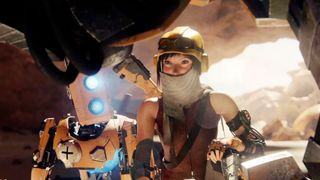 ReCore, the Microsoft-exclusive game that stole our hearts at E3 2015 with a slick teaser featuring heroine Joule and her robo-dog Mack. It’ll be out next week, but if you're still deciding whether or not to get excited, wondering what the game looks like in motion, Xbox spokesman Larry Hryb has 50 minutes of gameplay to share with you:

ReCore will be available September 13 in North America and September 16 in the EU. It's one of Microsoft's first Play Anywhere games, meaning that when you buy a copy for Xbox One, you'll get a copy for Windows 10 at no extra charge (and vice versa).