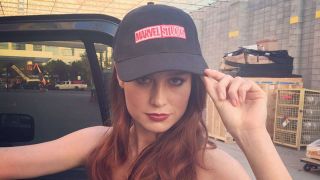 No, Captain Marvel isn’t in Avengers: Infinity War – heartbreaking Infinity War post-credits scene mention aside, of course – but there’s an incredible Easter egg lying in wait that not only seems to confirm what Carol Danvers has been getting up to in the interim between her standalone movie and Infinity War, but also gives us a good indication of what’s coming next for her.

The Easter egg in question comes from Reddit (where else?) and, honestly, it’s a little surprising no-one’s picked up on this before. Cull Obsidian, during he and Ebony Maw’s first foray to Earth at the beginning of the movie, clearly has some familiar-looking red and blue fabric hanging from his belt. Take a look.

While nothing’s been officially confirmed, that sure looks like a strip of Captain Marvel’s suit hanging from the Black Order member’s midriff.

What could that possibly mean? For one thing, if the Easter egg rings true, it’s very likely that Carol Danvers and either Thanos or the Black Order have had a scrap before. Worse still, it appears as though Captain Marvel came off worse, judging by the use of her suit as a ‘trophy’ and her absence from Infinity War.

So, are we going to see what happened to Captain Marvel? Her standalone movie is ripe for the picking when it comes to explaining the missing gaps in her tale, and by introducing Cull Obsidian and Ebony Maw already, the movie’s got a potential set of baddies just ready and waiting in the wings.

As for what happens next – that’s anyone’s guess, but part of me thinks that Ms. Danvers isn’t going to be too happy with Thanos when she rocks up again – and she might want to avenge one of her first defeats. But that’s a story for another day...